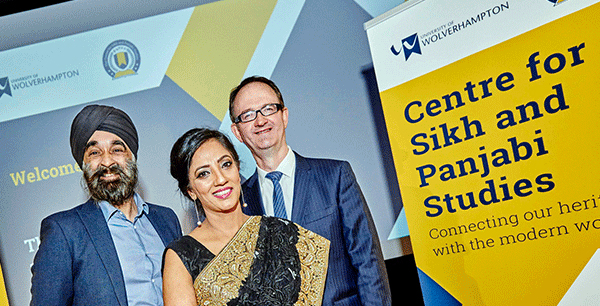 Wolverhampton University launched the UK’s first Centre for Sikh and Panjabi Studies this week at an event attended by local dignitaries, members of the community, and internationally renowned Punjabi singer and poet Dr Satinder Sartaaj who provided the key note address. The Centre has been launched following the extensive efforts of Dr Opinderjit Kaur Takhar, Course Leader in Religious Studies in the School of Humanities at Wolverhampton University who has been appointed Director of the Centre. An internationally-recognised researcher on the Sikh way of life, Dr Takhar has published extensively on the Sikh and Panjabi community, and has been sharing hints of the Centre’s establishment on social media over the last few months.

Although the Centre for Sikh and Punjabi Studies has launched, it has not opened in practice just yet, but when it does so it will offer PhDs and Master’s level courses in Sikh studies, as well as continuing professional development (CPD) courses for teachers and managers of diverse workforces such as national and local government, the NHS and the emergency services. It will also offer training for Granthis and Gianis, individuals taking the religious lead in Gurdwaras, short courses in religious literacy and language to address the loss of the Panjabi language in younger generations, as well as teaching in English to promote bilingualism and skills for life. The Centre will be involved with the exchange of knowledge on an international platform using the links it has already established with Sikh Studies scholars across the globe.

At the launch Dr Takhar said, “The Centre for Sikh and Panjabi Studies will be based around a nationally-leading research hub, with large-scale research projects into Sikh history, art and literature, diaspora, identity, inter-religious dialogue, culture, community and place, all within the context of a 21st century global society. To highlight our research we will create an open access peer-reviewed scholarly journal, an annual Sikh Studies research conference, a public lecture series and research-informed exhibitions. We aim to be a centre of academic excellence by becoming the national voice for academics active within Sikh and Panjabi Studies and through links with overseas institutions, particularly with universities in Panjab, we will provide opportunities for student exchanges and other collaborative projects to encourage understanding around the world. The focus will be on lifelong learning from both inter-faith and inter-disciplinary perspectives with an aim to increase knowledge and promote dialogue. Our aspiration is to create a space for current and future generations in which they can feel comfortable in enquiring about their faith, its principles and ethos. The Centre will be a ‘go-to place’ for any individuals or organisations wanting to know more about the Sikhs and their faith, and it will be the first of its kind in the UK.”

The launch of this Centre at an institution of higher learning in the UK should be welcomed and celebrated; we need such places for discourse, engagement and learning. That Wolverhampton University has taken this step is commendable and they will rightly take many plaudits for doing so. One can only hope that this will encourage other institutions to follow suit, for the establishment of such places in academia has been long overdue. The lofty ambitions of the Centre at Wolverhampton University will no doubt be realised to some extent, but are more likely fulfilled satisfactorily across a number of institutions where focus can be made on differing disciplines, linking to specialist subject areas that already reside within that institution. It can only be beneficial to the arenas of Sikh Studies and Punjabi Studies if this landmark moment is replicated (over time) elsewhere, perhaps drawing on the model that Dr Takhar has pioneered in Wolverhampton.

As mentioned previously, the aim to open a Centre for Sikh and Punjabi Studies is not new – in fact it dates back decades, but as many Sikh academics have found it is not easy to launch such an endeavour. There have been hints of Dr Takhar’s path to launching this centre on social media, but it will be interesting to learn more now that the launch has officially been announced. It is not unfathomable for this centre to find itself compromised or dominated by a single school of thought like the umpteen academic places that have arisen in North America over the last two decades, doing more damage to Sikhs than good, and positioning themselves at odds with the Sikh Panth. With this in mind, it is notable that the acting Consul General of India spoke at the launch, following on from the Indian State’s sponsorship of a photo and art exhibition on Guru Gobind Singh at Wolverhampton University. Whilst of itself this does not mean or point to anything nefarious, it does hint at the level of conversations that need to be had to push through a project like this; there is a price to pay to enter the playing field that touches on subject matter of importance in international politics.

It is for this reason that Dr Takhar and her colleagues at Wolverhampton University are to be congratulated for the launch of the Centre for Sikh and Panjabi Studies. It is no mean feat to get this far and shows dedication and commitment to a cause that clearly Dr Takhar holds dear.