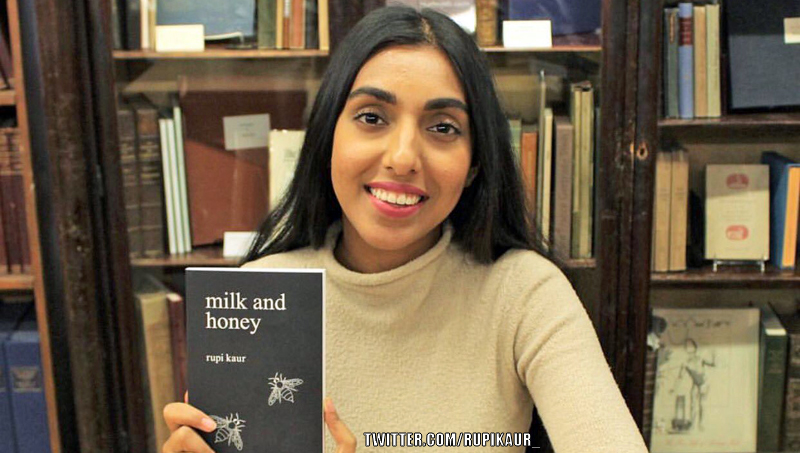 Earlier this month, media site Buzzfeed published an article critiquing the work of Canadian author Rupi Kaur titled ‘The Problem with Rupi Kaur’s poetry’. Kaur’s meteoric rise on to bestseller lists with her work ‘milk and honey’ has been matched by her rapid and continued growth online with a social media reach of millions around the World. Of late she has faced criticism from some and I read the Buzzfeed article expecting it to be more of the same. I was however, surprised to find the critique of an altogether different nature.

The article on Buzzfeed was authored by Chiarra Giovanni, a PhD candidate studying Comparative Literature at Stanford University. From reading the article it seemed to me to be a heavily edited dissertation which can be infuriating because the lack of footnotes and exposition of theory can make for a disjointed piece online, but whilst it was unnecessarily lengthy for the medium, I was able to follow Giovanni’s arguments. Unlike some of the criticism of Rupi Kaur that I have encountered previously, this was a structured critique that would resonate with some readers to varying degrees over the course of the piece. I would perhaps have included myself amongst that group, save for a nagging doubt that repeated in my mind throughout: context.

The critique covers a few different ideas about the “problem” with Rupi Kaur’s poetic work, explaining how it is vague, driven by marketing, perhaps even exploitative. One sentence though captured the heart of what was wrong with the piece for me: “...there is something deeply uncomfortable about the self-appointed spokesperson of South Asian womanhood being a privileged young woman from the West.” Despite the arguments laid out in the critique and the use of FAQs from Kaur’s website, I didn’t agree with the notion of Kaur appointing herself as a spokesperson of South Asian womanhood, much less her being a privileged young woman from the West. Rupi Kaur was born in Punjab and has grown up in Canada. She comes from a Sikh family who have lived through the events of 1984 and the years of brutality that followed in the land of the five rivers. In contrast to many of the women living in South Asia today she is privileged, but the image conjured by Giovanni’s words states so in a matter-of-fact way, devoid of her background. It dismisses the struggle faced by millions of Sikhs, but also the very real risk of brutality, torture and annihilation that would have reverberated throughout her upbringing and would have been central to the decision to migrate. Moreover, the loss of homeland that Sikhs continue to deal with – Punjab divided between India and Pakistan, the former where Sikhs pitched their tents now a State at war with them – plagues the conscious minds of young artists like Rupi Kaur. The sheer amount of creative work that has been created on the topic should have led to Giovanni pausing to choose her words more carefully.

Part of me wonders how much of the criticism Rupi Kaur has been facing is based on her depicting herself as “Sikh-Punjabi”. Contrary to what Giovanni asserts about the positive power of branding in Kaur’s work, she fails to take into account the negative repercussions of Kaur politicising herself as Sikh and Punjabi, as opposed to Indian. Using the terms ‘South Asian’ and ‘brown’ is a commonly-used tactic by Sikhs and Punjabis who don’t wish to identify as being ‘Indian’ (I do this myself) and this was in the uppermost of my thoughts when considering if Kaur is “self-appointed”. Clearly what she says echoes with many other women in the region, but is the label South Asian being misconstrued by outsiders who don’t realise some Sikhs use it as a fail-safe? Maybe Kaur doesn’t, but that tag of “self-appointed” troubles me from another angle too, that of Kaur’s Sikh way of life. A key element of Sikh teachings is empathy and the strengh to speak out when others don’t. Would it change Giovanni’s characterisation of Kaur in this way if she was better educated on Sikhi (not by wikipedia, but naujawani!)? In a World obsessed with interpreting everything through man-made (Western) constructions, somebody who sees things like Sikhs do is an easy target. My counter argument is not simply to say Rupi Kaur is a Sikh so that allows her to speak on behalf of others, but to highlight that a critique of this depth should not be ignorant of how this impacts her landscape.

I’m not making any claims on behalf of Rupi Kaur; I don’t know her beyond her work and the one occasion on which I met her when we conversed for all of 30 seconds. What I have written is my perception of Rupi Kaur, her work and how it is received in the critique. I thought for some time whether or not to publish this piece for a variety of reasons, but the fact that the critique was published on Buzzfeed and will have been read by millions pushed me to do so; there has to be a response documented somewhere even if it doesnt say everything I want it to, in the way that I want to. A Sikh lens must be applied to this discourse.

When you get as big as Rupi Kaur has, one expects critics, competitors and ‘haters’ to come out as they have done over the last year. But I don’t think Chiarra Giovanni counts as one. Poetry invites real depth of discourse which I found her critique doing, even if I didn’t agree with some of the statements and all of the conclusions. It would have made for much better reading on a different platform by retaining more detail and appearing less provocational and this would also have lessened the bitterness that a reader naturally senses in the writer when they’ve put their name to what is essentially click-bait. Rupi Kaur did not respond to queries from Buzzfeed to comment according to the article and I hope I am right in the reasons why – a poet is a thinker, author, dreamer; to know what they think one has to experience their work. Comments will also come through their work, if at all (preferably not at all); discourse, critique and responses are for the audience.