God, I’m so sick of online social justice warriors.  You know the type.  They overuse the word problematic.  They pretend to fight for the rights of the underprivileged but in reality they’re just rich little brats driving cars their parents paid for. And now to add more salt to the open wound of my annoyance, they’ve jumped on the “Binnu Dhillon is doing blackface” train.  Someone save me.

Blackface is a racist American tradition where white people darken their skin and do minstrel shows full of horrible caricatures that mock African Americans.  Blackface is also when an ignorant person paints their skin darker in order to imitate a person of African heritage.  In his latest release Kala Shah Kala, Binnu Dhillon does neither.  Nonetheless, desi social media accounts are proclaiming that his new movie is racist.

Let me be clear, Kala Shah Kala is based on an ill-advised idea.  Producers should have found a darker skinned actor to play the main role and created a work of art that shows audiences how stupid our colonial colourist mindsets are.  Upon seeing the movie posters I was hurt and livid just like many of my fellow darker skinned Punjabis.  We’re sick of light skin worship.  But again, I’m cognizant enough to know this is not the same as blackface.  We cannot co-opt the black struggle and pretend it’s the same crap that Punjabi movie producers are pulling.

Let’s play devil’s advocate. Who knows, maybe one could argue that the movie is racist because there are some kinds of prejudice in Punjab that are similar to anti-Blackness in America.  Yes, there is some cross over between U.S. history and caste-based violence in South Asia.  In both cases there are lynch mobs and there is segregation based on what family a person is born into.  But in India that reality is different than the African American experience. Equating the two situations doesn’t work because the U.S. case is based on white supremacy, while in South Asia it’s based on Hindu religious practices. Furthermore, it’s quite a stretch even to try and argue that Kala Shah Kala is addressing ANY of this.  Pro-Hindu movie censors wouldn’t even let producers delve into any of this even if moviemakers wanted to! Once again, the movie may be lame and hurtful, but it’s not racist.

It may sound enlightened and sexy to claim Binnu Dhillon’s new movie is racist, but in reality the point is irrelevant because the movie isn’t even about race – it’s about colour.  And truthfully, if Kala Shah Kala is a movie that teaches audiences not to be colourist then its message could be meaningful and long overdue.  Yes, it’s a movie that should’ve starred a darker skinned actor and it’s difficult to grasp how horrific it is to see promotional ads for it, but perhaps there is positive dialogue that could come from it.  Claiming that the movie poster is racist is truly overboard.  The movie ads are ignorant, colourist, prejudiced and one hundred percent stupid, but they are not racist. Binnu Dhillon isn’t pretending to be a person of African heritage. He’s not caricaturing anyone except an embarrassing and sickening prejudice still prevalent in Punjabi culture.

So to all the online warriors, please think twice before jumping to conclusions. If you’re really against colourism in our community ask yourself – do you only date light-skinned people? Do you like photos where the subject has obviously used make-up or filters to lighten their complexion? Do you praise those who have green eyes or “don’t look Punjabi?” Do you stay out of the sun? Is your foundation a few shades too light for you? These questions are more linked to the debate that the film raises than false claims of it’s racism ever could be.

A Candle in the Dark 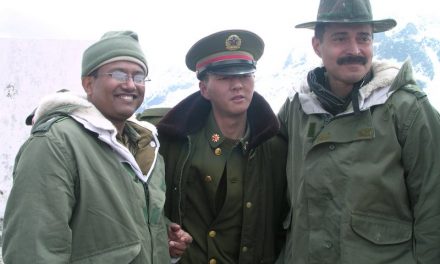