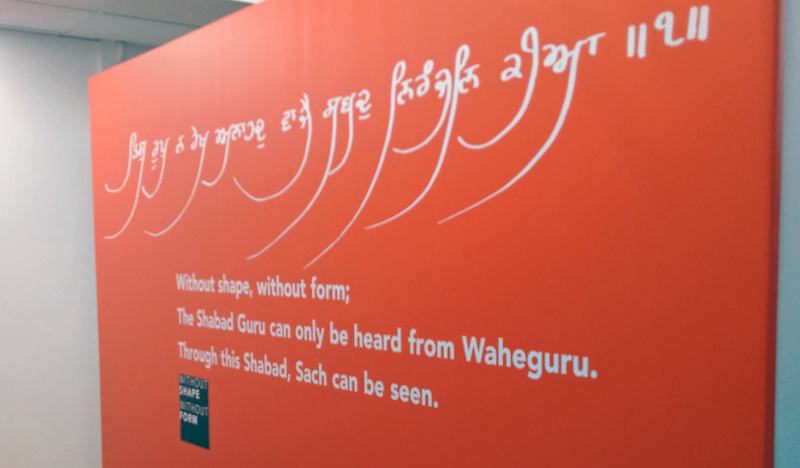 A new permanent gallery of Sikh art has opened in the United Kingdom. ‘Without Shape Without Form’ is based at Slough’s Guru Maneyo Granth Gurdwara and is a collaboration between volunteers at the institution and Canada-based Art of Punjab, home of artist Kanwar Singh.

Kanwar Singh was born in Amritsar, Punjab, but has been residing in Canada for many years where he trained and honed his talent. His artwork has grown in prominence over the last decade, thanks in no small part to social media, although it should be noted that both he and his brand ‘Art of Punjab‘ are not prolific social media posters. His popularity is a testament to the depth of his art work, and I would proffer that he has garnered many of his fans and customers around the World through his humility and generosity which I have personally experienced.

Kanwar Singh is that rare breed of artist who devotes immense time to reading accounts from Sikh history; he compliments this by contemplating Sikh ideology, allowing ideas and visions to fester, all before he has put a pencil to paper let alone his brush to canvas. Whilst clearly a talented artist, in my opinion his paintings are becoming as important to relaying the Sikh narrative today as those of Kirpal Singh a century ago.

In this context, it was welcome news to learn of a permanent gallery for Art of Punjab in the UK. The gallery-cum-exhibition sees the unveiling of several new works and one can reasonably expect future new works to be displayed here too – much needed for those of us who find it difficult to appreciate art of this magnitude and sheer size from digital renditions alone. It is important to note that at this time the gallery incorporates a community youth art project presenting the work of over one hundred budding young artists who created a range of art portraying history. This inclusion was no mere lip service to the local community or young people, but was initiated by volunteers at the Gurdwara who had been inspired by Kanwar Singh on a trip he took to the town in 2016. It is to be appreciated in its own right alongside the main focus of the gallery.

The exhibition space is considerable and like the Gurdwara building it is open and light which is vital when exploring each work of art from different angles. I can envisage that at different times of the day and in different seasons of the year, the mood of the space will evoke a variety of feelings for a range of visitor experiences; on this opening weekend for example, the dark night sky and throngs of visitors celebrating the Gurpurb of Guru Nanak made for an overwhelming, but not at all unpleasant viewing.

There is a clear pathway to follow through the range of paintings, all of which are accompanied by sizeable labels depicting the subject matter of each respective work. A variety of volunteers from the Gurdwara contributed towards the textual work but the editing is commendable as this doesn’t show. Other visitors on the weekend felt the same, one highlighting specifically that where Gurbani had been used in depictions it was kept to its original Gurmukhi format with no English language interpretations provided which is not only brave, but an excellent decision so as not to misdirect the reader.

The bold uniform colour of panelling aids the flow of visitors with plentiful space to step back and take in paintings. Despite the rush and popularity of the opening weekend, the Gurdwara volunteers were incredibly organised and patient throughout to assist visitors and allow them to experience the art work rather than simply wander through (long may this continue). A chronological route is taken from portraiture of Guru Nanak I – X, through to the installation of the Guru Granth Sahib, followed by selected personalities from Sikh history in a range of situations. Kanwar Singh’s work is breathtaking; whether it is a style you take pleasure from or not, his vision and attention to detail is undoubtedly of high caliber. It does what great art should do: make you think. In this guise the gallery at the Gurdwara will instigate numerous conversations within Sikh study circles and forums, not to mention amongst the wider UK Sangat.

Speaking to Gurdwara volunteers, Trustee Savraj Singh and Creative Director Deep Kaur, I was impressed by their reasoning behind why the Gurdwara opted to curate ‘Without Shape Without Form’. It is of course another mode of communicating with generations distant from the Punjab as to what Sikhi is all about, but more than that it is an homage to the House of Guru Nanak using a means that has hitherto largely been unexplored across the Sikh World. Talking about the community art project, Deep Kaur expressed her privilege at being involved and envisages that it will become an annual event nurturing and curating aspiring artists, whilst Savraj Singh aspires that it will help future generations recount Sikh history. My time was very limited at the opening this weekend, and so unfortunately I was unable to personally meet Kanwar Singh at the exhibition. In retrospect, perhaps that is how it should be, for he meets each and every visitor through his artwork in a way that would be difficult to live up to.

‘Without Shape Without Form’ can be seen at Guru Maneyo Granth Gurdwara, 221 Bath Rd, Slough SL1 4BA. Please check opening times before travelling at https://www.withoutshapewithoutform.com.
Paintings from Art of Punjab can be seen and purchased at https://artofpunjab.com. 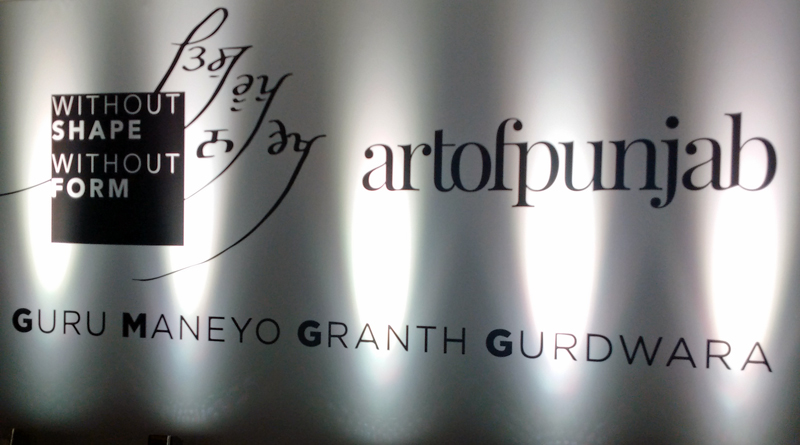