Testing times in days of our lives

The next few days are some of the most important that many Sikhs will experience. After weeks of incidence in the Punjab, beginning with the Akal Takht Jathedar’s decision to controversially pardon the infamous head of the Sirsa Dera, and most notably the continued acts of beadbi (sacrilege) of the Guru Granth Sahib, this week heralds the first Sarbat Khalsa after almost three decades. It has not been an easy road and the circumstances are far from ideal, but the fact that so many Sikhs have called for reform and are looking at this as the first step to build from, puts the global Sikh community in a position that was quite unimaginable earlier this summer. But in the Diaspora, so far removed from the fields in Punjab where Sikhs will gather, will we grasp this moment to regain control of our institutions, reignite our relationship with the Guru, and indeed give renewed meaning to our lives?

A Sarbat Khalsa was traditionally held twice a year to coincide with Vaisakhi and Bandi Chhor Divas, where Sikhs of all backgrounds would gather to debate and discuss the issues of concern to the Panth. The Sarbat is but one of a number of political forums that were introduced by the House of Guru Nanak for people to take control of their society and in so doing, their own destinies. The Sarbat that has been called to take place tomorrow on Tuesday 10 November is not without controversy as concerns over protocol and due process remain unsatisfied, but as the Sikh Research Institute’s Harinder Singh said, “this is an opportunity to establish the procedures for how the Sarbat will operate now and in the future”. Harinder Singh is one of five North American representatives who have travelled to the Punjab and have worked hard to bring together Sikh groups with differing mandates to attend the Sarbat Khalsa, even if they do not endorse it at a participatory level. They are acting in the spirit of what the Sarbat Khalsa stands for and it seems that is something that many Sikhs in the west could learn from. 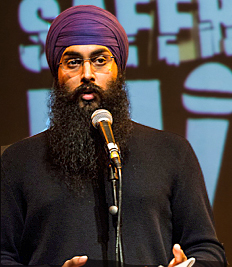 Whilst it is difficult for most Sikhs to travel to Punjab for the Sarbat, particularly at such short notice, the North American representatives’ attendance symbolises the importance of the Diaspora to this conversation. Others have also travelled from Europe and South East Asia, and from the United Kingdom, it gives me great pleasure that Shamsher Singh of the National Sikh Youth Federation has made the journey, so that at least one UK voice – and a youthful one at that – will bear witness to the event.

“The current situation on the ground and the historic nature of the Sarbat Khalsa is far too significant and is not something I feel I can miss out on. I really want the chance to live as a Sikh activist in Panjab, a chance to experience the reality of situations I’ve only read or written about. If my courage or faith is tested I hope to live up to the Sikh legacy.” -Shamsher Singh

Shamsher Singh has contributed to our work at naujawani on a number of occasions and is dedicated to making a better future for Punjab, Sikhs and the World as a whole. His decision to attend the Sarbat must have been an incredibly difficult one, but one that he as an informed individual will have made in the right spirit. Perhaps there would be more western attendees at the Sarbat if we as a community were to devote significant time to studying the Sikh way of life and engaging in meaningful discourse as Shamsher has done in rceent years, rather than living by the rhetoric and broad moral principles that have over-simplified what was and still is a revolutionary ideology.

Alongside the Sarbat Khalsa, this week is important for Sikhs in the West to measure just how dedicated we are to reform of our institutions and revitalising our relationship with the Guru, as we will see if the call for a ‘black Divali’ goes unheeded or accepted. Leaving aside the miscommunication of a South Asian cultural reference (‘Kaali Divali’, not celebrating Divali, is common in South Asia for families who have suffered a close bereavment), it is going to be interesting to see if Sikhs forego the usual celebrations of the Bandi Chhor Divas.

The date commemorates the selfless deed of the Sixth Guru Nanak when he refused to leave Gwalior Fort without all other political prisoners who had been unjustly incarcerated there as he had been. He was successful and in that instance the Sikhs’ unwavering commitment to human rights was enshrined. Upon Guru Hargobind Sahib’s return, Sikhs lit up the night sky with candles and rejoiced with festive sweets, something that has continued to this day. Of course candles have been complimented with elaborate fireworks displays and obscene amounts of fairy lights in recent decades, and it is sad to admit that for many Sikhs this epitomises the festivities. There are few thoughts given to human rights endeavours or the political framework that the Guru delivered which truly encapsulates the date. I have heard that it is even being argued by some Sikhs that our attitude of ‘chardhi-kalla’ demands that we do not mute the celebrations this year – as if somehow the lighting of candles, letting off of fireworks and consumption of jelibeean were representative of what the Guru wanted to teach his Sikhs as he departed from the Gwalior Fort.

I can understand that we should not mark this Bandi Chhor Divas in a solemn mood, as if the skies above us are metaphorically as well as literally darkened – but to suggest that by maintaining the status quo we are achieving something is not only a sign that we do not understand what it means to be chardhi-kulla, but that we are not yet ready to face up to the reality of where we find ourselves as a Panth today. Three years ago I wrote a piece explaining why I don’t celebrate the Bandi Chhor Divas with fireworks, candles and sweet things; the events of spring and autumn in 2012 transpired to hoist me from the motions that I had gone through unenthusiastically because it was ‘what Sikhs do’. Customs and festivities only have value when we understand what gave birth to them, and then, only when seen in the context of the times we live in. I would hope that this week sparks at least a few others to dedicate themselves to learning, experiencing and participating in making the World a better place as Shamsher Singh and Harinder Singh amongst others are doing; that we take time to discover and analyse what is taking place at the Sarbat Khalsa; that we mark the Bandi Chhor Divas not as we have in years gone by, but with a renewed spirit for what the Sixth Guru Nanak did that day. As I wrote in that article three years ago:

“Tonight I will be surrounded by the written word in search of greater knowledge and understanding of why things have come to be this way; why it is that millions will celebrate a most noble act in defence of human rights, but are unlikely to spare a thought for such acts occurring on our own watch. From Punjab to Palestine, China to Uganda, there are political prisoners a-plenty, thirsting for a glimpse of the night sky once again. We must live and not merely celebrate the legacy of Guru Hargobind Sahib by becoming ambassadors of the House of Guru Nanak in more than name alone. Make this night the first of the rest of your life.“