The Punjabi Folk Star who goes by the name of Kulvinder Johal has a new single out. Will ‘Nach Nach Ke’ featuring Kaos Productions find its way onto the heavy-laden shelf of much-loved hits sang by Johal?

The simple yet catchy lyrics to ‘Nach Nach Ke’ depict the sweet image of a party scene and were chosen by Kulvinder Johal himself. This is a party and dance track with appropriate lyrics to appeal to all ages. Some might say that makes it cheesy, but it appeals to the dance floor where catchy phrases like that can make a smash hit – you can’t really go wrong with this formula!

‘Nach Nach Ke’ has an immensely clean and sharp sound. The record shows diversity at the start where Kaos Productions throw in some reggae snippets and that same influence continues with a deep baseline throughout the track. Amo from Kaos Productions uses his skills as a self-taught mandolin player to great effect and together with the sarangi give it that traditional vibe.

The producers explained that this song had been made for a live audience and to work well on a P.A. The song might seem a little repetitive, but is more than fit for this purpose. The beat is continuous largely so people have no reason to stop dancing from start to finish again fitting in with the caliber of this type of record. Feedback to the release has been widely positive and there is no doubt that the song has already made into current party playlists.

Kulvinder Johal has been in the UK since the 1980s and is now an accomplished folk singer in the bhangra industry. He began singing and reciting verses from ‘shaheedi’ songs when in high school, but it was only a hobby until his full potential was seized upon by producer Tru-Skool. The two have worked together over a number of years now and the producer is largely credited with turning him into the smash hit maker he is today.

Whilst Kulvinder Johal is a great singer and has fans in awe from his dance hits to date, it could be said that this release is rather playing it safe. It would be great to see him come out with something quite different and show off his versatility. Perhaps that is what lies next, as an untitled album is due for release this year from which ‘Nach Nach Ke’ is the first single. Kaos Productions too have an album in the works which it is rumoured will not be a conventional album – something for all us bhangra junkies to look forward to!

When it comes to bhangra music videos, there’s not much better than traditional dancing and seeing the singer themselves. It’s a simple concept that has again proven to be successful here with the music video showing 6 traditionally-dressed dancers dancing along side Kulvinder Johal. The video is colourful, respectful and most importantly imitates the song, making this record all the more about the vocals and the music.
‘Nach nach ke’ is produced by Kaos Productions – the dynamic duo behind recent smash hits ‘Time Naal’ by Manak-E and ‘Gidheh Vich Nach’ bu Gurbhej Brar. Many bhangra fans will only have heard of Kaos Productions over the last few years, but their musical talent started from way back when Amo (one of the 2 brothers who make up the outfit) was only 8 years old and played tabla along side his dad singing religious hymns. A move to Canada in 1994 introduced them to a new underground movement of Punjabi and hindi remixing and after some experimentation, they released a mix-tape titled ’Mighty Manak’ which to their surprise went global! When they moved back to the UK, Kaos Productions held back releasing new mixes on the advice of their father who wasn’t keen. But by 2007, they were persuaded to hop back on the scene by producer and friend Tru-Skool… and we are glad they have!
For those who don’t know the name Sardool Sikandar, you are missing out! You might have seen him star in a few Punjabi films from the 1980s where he showcased his musical talents, but this folk king has over 27 albums to his name. To pick one for our ‘Blast from the Past’ is hard, but I’ve opted for ‘Laung Ton Koka’ – a great upbeat classic. The lyrics in this song are so catchy and full of charm, perfectly matched by Sikander’s raw yet warming voice which carries out the vocals effortlessly throughout the song. I’ve always thought that his pronunciation is what makes him stand out from other great singers and you can hear that on this song. There is a long start to show off the live percussive instruments and the epic dhol at the beginning is quite something. The tambourine through out the song is something rare in today’s music but such a simple instrument makes the beat ever more so catchy. So have a listen to Sardool Sikandar and get him into your old-school Punjabi playlists now! 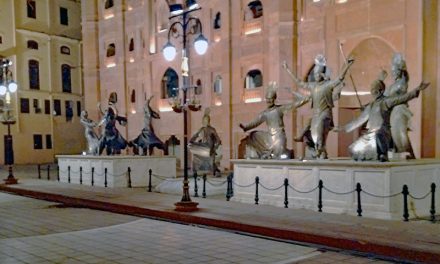