Over the weekend major media channels of India – a secular democracy – are reporting a ‘grievance of the nation’ due to the loss of an iconic Hindu leader. Based in Mumbai, Bal Thackeray died on Saturday 17 November in the city once known as Bombay, which he was instrumental in converting from a secular place to one dominated by a single community.

His funeral today in the evening after a public display of his body in Mumbai is reported to have been attended by more than two million people. The whole city is at a stand-still; even entertainment channels are silent; whole trains, buses and taxis are off the roads; such is the dominance of this man, even in death. But for so many, it is fear and not grief that is bringing things to a stand still.

Bal Thackeray started his career as a cartoonist and is considered a symbol of Indian pride. There is no doubt that he was an admired speaker who spoke his peoples language and gave voice to their sufferings, but similarly it cannot be denied that throughout his life he mostly targeted the dangers of Indian secularism.

He is credited for creating a sena – a social network of dedicated workers, concerned for the well-being of the native Marathis who felt left out by the influence of others in their own land of birth. Over time, this sena named after the legendary Shivaji Bhonsle, created a fear in the minds of the regional established order. Under the leadership of Bal Thackeray, Shiv Sena raised the bogey of deprivation for native Marathis through rhetoric and intimidation, and went on to become a strong political party in the Maharashtra region.

In his earliest days, Bal Thackeray went about destroying the organised workers unions, replacing them with his own personnel. With increasing power, the established groups and communities of Mumbai spoke out less and less against the Shiv Sena, the reason that until this day the famous Bollywood studios dare not to bring out any notable presentation without approval.

In the years that followed, this supposed ‘son of the soil’ publicly supported the imposition of Emergency Rule in the mid 1970s – a proclamation of Prime Minister Indira Gandhi’s that resulted in a total democratic failure of the nation and led to large scale detention of major political leaders who were in opposition. It has also been alleged a number of times that he was a key figure behind heinous anti-Muslim riots, and coupled with his provocative comments following the murder of a prominent trade union leader in 1970, Krishna Desai, it is quite uncomfortable that he has commanded such ‘national grief’ and continues to be reported as a tiger by the Indian media.

I feel a loss of words in showing my anguish and grief at the disparity of how those who speak out in this country are treated. Bal Thackeray, a member of the majority community, rose on the national stage, whilst countless minority leaders who talked about greater autonomy for Indian States were totally outcast. Further still, the sacred places and people who dared to side with a minority leader were sidelined and razed from the political landscape, merely by association.

The Sikh people have suffered in this way and continue to suffer today. Bal Thackeray is of no comparison with Sant Jarnail Singh Bhindranwale, but look at how the two are treated: both came about at the same time, and both raised the issues that concerned a certain group of people; but when Sant Ji was killed by the Indian Army in 1984, the nation was shown to be joyous whilst today it is shown to be deeply grieved. Unlike Sant Jarnail Singh Bhindranwale who like all Sikhs sought ‘Sarbat da bhalla’, Bal Thackeray lived a life of vengeance and divisiveness, stirring ethnic tensions in the melting pot of Mumbai.

A great political cartoonist who made fun of gullible people, Bal Thackeray is now in death, living proof that belonging to the majority community in a secular democracy affords a vastly different eulogy than for those of us from minority communities. 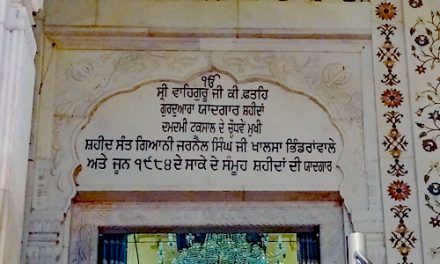