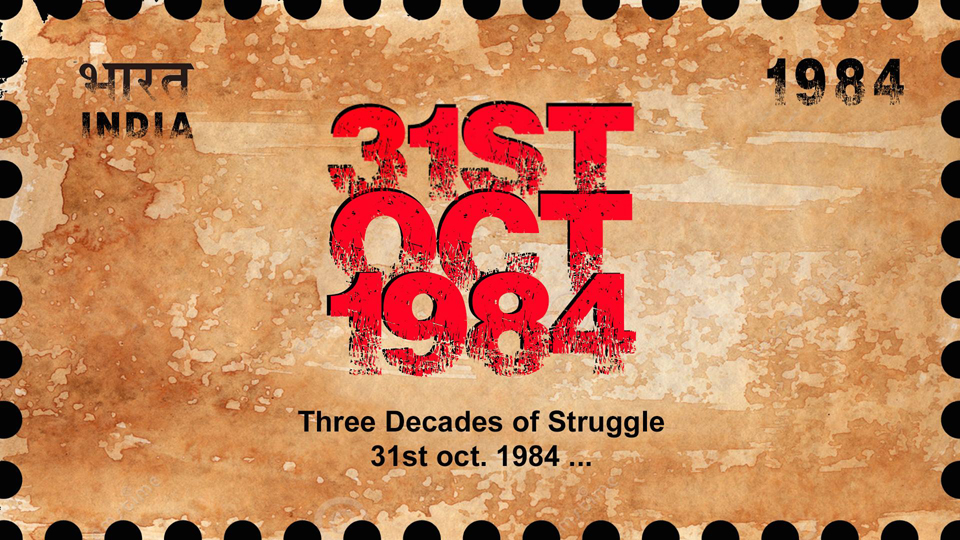 It’s not often that a film relating to Sikhs is screened at a film festival, so when I came to learn that a feature film set on the infamous day that triggered the murder of tens of thousands in Delhi in 1984 was being shown at the London Indian Film Festival, I made certain to make the public screening; particularly as this was a film about which there was very little information online.

Last night I took the opportunity to watch ’31st October’, a film produced by Harry Sachdeva focusing on the struggle of a Sikh family for survival, following the assassination of then-Indian Prime Minister Indira Gandhi. Devinder, a father of three (two young boys and a baby daughter) along with his wife Tejinder manage to avoid the violent outbursts that plague Delhi in the hours after the shooting, reaching the relative safety of their home. However, it soon becomes clear that they are not as well protected as they might hope and a mission to save them ensues led by close Hindu friends who reside on the other side of Delhi. It is a difficult subject to be tackled by first-time film-maker Sachdeva who created this story as it is one close to his heart – in 1984 he was a seven year old boy in Delhi, and to this day he still recalls the terrifying hours hiding under his bed as organised mobs roamed the streets looking for Sikh households like his own.

As somebody who cringes through the normal Bollywood fodder that is passed off as drama, I was incredibly surprised by the quality of ’31st October’. Whilst the lead characters and their particular story is a work of fiction, it is one that bears a strong resemblance to the numerous accounts that have been published by Sikhs who survived that period in Delhi and it is presented here with some success. The film contains a few examples of the melodrama that typifies Indian cinema which belittles and disrespects the intellect of the average cinema-goer, but fortunately they do not pervade this entire work. At shy of two hours, the narrative is kept flowing at a good pace whilst the effects and action scenes do not overpower the sincerity of the dialogue and acting, ably directed by the award-winning Shivaji Lotan Patil. Perhaps most remarkably, musical numbers have been limited to just two occurences in the film and are more akin to the musical montages seen in Hollywood productions than the lip-synching banality which destroys the credibility of South Asian script writers.

This is not a film without it’s flaws: a clown-like Sardar makes an appearance early on in the film, allegations of Sikh terrorism against Hindus are put forward without challenge, and it is asserted at one point that the Sikhs were created to protect Hindus. However, I was not left reeling as I have been in other films as these were to some extent tastefully handled, or as much as they could be. What is most interesting to note is that this is a film very much of today and one that I think could not have been made a few years ago under a Congress Government. Whether subconsciously or by some design, there is no coincidence that this film will be released as Indian society is undergoing a Hindutva transformation led by the dominant BJP; the story highlighting the kindred relationship between a family of Sikhs and their Hindu friends who are willing to risk everything to save them, does not look out of place in Modi’s redefining of the nation. Characters portraying the roles of Congress Party accused Sajjan Kumar, Jagdish Tytler and H.K.L Bhagat are easily recognisable. But that being said this is not a narrative without foundation in reality, and the prevailing message that not all people lose sight of their humanity at times of extreme duress is admirable. Having heard Harry Sachdeva respond to questions after the screening, my positive outlook on this film was cemented – this is a work he has laboured on for twelve years in some regard and as he faces the rigours of the Indian censor board and certification in the lead-up to a general release in October, his indifference to box-office success distinguishes him from the gluttony of film-makers who have been producing ‘Sikh films’ in recent years, many of whom have purely wanted to take advantage of a captive and financially lucrative Sikh audience worldwide.

To the credit of the film-maker, the questions that ’31st October’ left me pondering on my journey home across London are of the utmost importance and vital to understanding the Sikh psyche today. Primarily, I found myself asking what it was that led the Sikhs of Delhi in 1984 to go against centuries of Sikh demeanour when faced with oppression and certain annihilation. How is it that a people who proudly exclaim each day that their predecessors bore all manner of torture, were unable to show a similar resoluteness when faced with the same fate? Some readers might not consider this an appropriate line of questioning, but it becomes so in my opinion when we see it in the light of the decades that have followed, and entirely relevant if we consider how even Sikhs in the Diaspora now (mis)understand the Sikh way of life. When I saw the Sikhs of Delhi being chased in ’31st October’, I saw everyday people; and that is what these Sikhs had become. The sense of normalcy that Sikhs have gained across the sub-continent, how their way of life has been assimilated into just ‘another tradition’, cost them when it came to the events of 1984, witnessed most starkly in Delhi following the assassination of the tyrannical Indira Gandhi. Fast forward thirty years, and we see the same ‘normalcy’ that has enveloped the Sikh Diaspora when from the earliest days of the Guru, Sikhs were anything but normal – born to stand out. Of course there were pockets of resistance in Delhi, most notably in Trilokpuri’s Block 32 where Sikh residents who had determined to defend themselves and their homes had their firearms and kirpans confiscated by the colluding Police officers. But since seeing the final scene of the film which I shall not spoil by elaborating upon here, I have felt that this question needs to be discussed more widely and, if we are willing to learn from what we find, it will benefit our struggle today greatly.

Films such as ‘Amu’ and ‘Hawayein’ have both touched the audience and provoked questions in a way that ’31st October’ did for me at this screening. I sincerely hope that it passes through the censorship process without being touched and look forward to discussing this issue further after its general release this October.