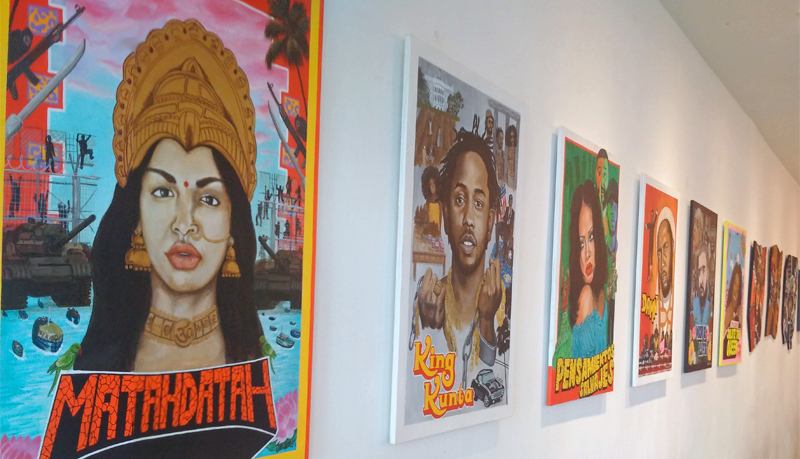 Jasmin Kaur Sehra is an artist in the UK who has been painting a portfolio of recognisable work for a number of years. She is presently collaborating with the Wandsworth-based street food restaurant Chit Chaat Chai to exhibit her most recent work from a series titled ‘Bolly-Hood’. The opportunity to munch on chaat, and take in art, on a warm summers evening was too good to turn down, so here is my review of this exhibit.

I’ve come across Jasmin Kaur Sehra in the past, most notably when she collaborated with the American graffiti artist Nisha Sembhi on a wall mural in London’s Brick Lane. Unlike much of the other art being created by young belaatis of Punjabi origin, Sehra’s work is not widely promoted using social media strategies that we have all become used to seeing, nor does she create work to reflect topical issues of the day or calendar dates in the Sikh community. It is precisely for these reasons that I have Instagram-stalked her work (as I have with a number of other artists) without engaging or promoting her. She is that rare breed of 21st century artist whose anonymity intrigues your mind, whilst her work captivates your eye; and after seeing her work up close for the first time, there is definitely something of a knock-out punch hiding behind those spectacles.

The work exhibited at Chit Chaat Chai is bold, colourful and penetrating. The focus of every piece is a hip hop icon, some more recognisable than others to a man of my age, but one need not be a hip-hop head to enjoy this work. Each piece is inspired by a particular song or album by the respective artist, and inspires the framing and selective elements that complement the portraiture. The Hounslow-native M.I.A. for example is featured as a goddess, referencing her repeated use of the moniker ‘Matangi’, on a backdrop that pays homage to her music video for ‘Borders’. The depth of the detail shown in the elements of each painting harnesses the iconic personality in the foreground, tempering what might otherwise delve into an overwhelming sense of colour.

I found myself staring at a few of the pieces without concentrating on the subject matter or hearing the associated piece of music in my head; as my mind wandered I forced myself to rethink the notions I had arrived with about seeing an exhibition of work infused with Bollywood-style graphics. It will come as no great surprise to regular readers of naujawani, that I am not a fan of Bollywood, or that I am lukewarm even when it comes to Punjabi cinema. But what I found Sehra terms as Bollywood inspired was more akin to the graphics I had grown up with from 1960s American TV shows, or 1980s bhangra cassette cover art. It would seem there is a connection, but irrespectively, just seeing the word ‘Bollywood’ titled in the series is no good reason not to go and experience the art for oneself. Upon reflection, the series seems to speak more to me about how an artist who has thus far shied away from public attention interprets the non-white faces that not only symbolise music culture in this era, but represent what it means to be globally famous. The prominence given to each iconic head and face stares back at you with a look of innocence, rather than the piercing eyes and all-knowing look of white face portraiture. The exhibition is in any case, worthy of lengthy, and not mere passing consideration.

Jasmin Kaur Sehra has achieved a loyal following of fans and patrons who appreciate her work, despite not having promoted herself extensively. It is easy to see why, and I look forward to seeing more of her work exhibited publicly. She can be found (and followed) on Instagram, and for those wishing to own a piece of her work thus far, a selection is available on jasminsehra.bigcartel.com. The Jasmin Sehra x Chit Chaat Chai exhibit runs until 26 September 2017 – do check opening times (and the menu) with Chit Chaat Chai before you head out.

‘Keep Moving On: The Migration of a Punjabi-Sikh Family’ – Amrit Singh