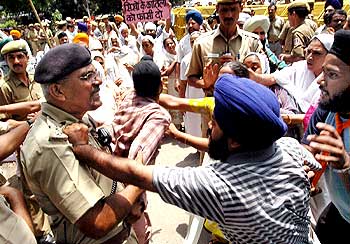 Thousands of innocent Sikhs were slaughtered during the Genocide that swept India in November 1984. The official line was and remains until this day that it was a spontaneous reaction to the assassination of Prime Minister Indira Gandhi. Yet independent reports published during and in the immediate aftermath indicate that it was a well-orchestrated and calculated attempt to systematically kill and rape as many Sikhs as possible, as well as destroy their homes, businesses and places of worship.

According to the Indian Government, 3000 Sikhs were killed during the massacre. However, the number of deaths identified by independent Human Rights organisations such as the ‘Peoples Union for Civil Liberties’ and the ‘Citizens for Democracy’, makes for grim reading. According to those independent sources, anywhere between 10,000 and 20,000 people were killed in the space of 3 days; that means almost 5 people were killed every minute! That does not factor in the amount of rapes that took place, nor the looting and destruction of Sikh property. 5 people killed every minute, that’s one killed every 12 seconds!

It’s worth noting this was not the first time the authorities had fabricated their official death toll. During the actual attack on Darbar Sahib 5 months earlier, the authorities had stated the death toll to be around 780 “militants” and civilians combined. However the work of journalist Brahma Chellany of the Associated Press found this to be completely untrue. Chellany was the only foreign reporter at the scene and his first dispatch front paged by the New York Times, The Times of London and The Guardian, estimated the death toll to be at least double that. The Associated Press stood by those reports and figures.

Back to November and the official line that this was a spontaneous reaction to the assassination of Indira Gandhi. There is a school of thought which suggests that a large massacre, code named Operation Shanti was always on the cards. It was planned to be unleashed in November 1984 whilst Sikhs celebrated the birth anniversary of Guru Nanak. Operation Shanti was to be a mass scale ethnic cleansing of Sikhs.

This notion has been mentioned by many writers, none more so than Dr Sangat Singh, a Sikh academic. He has suggested that as personal bodyguards of the Prime Minister, Beant Singh and Satwant Singh had caught wind of this plan and thus assassinated her in an attempt to prevent Operation Shanti.

This version of events starts to pick up credibility when you factor in the speed at which events unfolded on 31st October 1984. Rajiv Gandhi was sworn in just a few hours after his mother’s assassination and merely brought forward and put into action what had already been planned. There is the all too familiar account of how ministers and government officials such as Sajjan Kumar and Jagdish Tytler were responsible for leading goons equipped with voters’ lists to help identify Sikh houses and businesses. This coupled with the fact they carried the same type of weapon and were assisted by the police and other security forces at every given opportunity places further scrutiny on the State’s version of events.

The media, which at the time was State owned, also played a damning role in propagating “blood for blood” spearheaded by celebrities such as Amitabh Bachan, with the intention of rallying the goons into carrying out the mass killings. The Indian propaganda machine worked tirelessly to churn out a narrative that was engineered to safeguard the best interests of the State; and this continues until this day. In spite of all the independent reports, the world has been led to believe that the genocide was merely a “riot”, which in itself was a result of Beant Singh and Satwant Singh’s decision to assassinate the Prime Minister. This was further portrayed as an act of revenge for what had happened to the Sikhs in June 1984, which in itself was a last resort to flush out “militants”.

The blame for November 1984, whether directly or indirectly, has ultimately landed with the Sikhs. Rajiv Gandhi even went as far as suggesting that it was a normal reaction when he infamously likened the massacres to how the ground shakes a little after a mighty tree falls; a very subtle comparison to the natural world, almost legitimising the carnage that followed.

There is no denying the accuracy and precision with which the massacres were executed, but that is almost always overshadowed by the “official” narrative which takes precedence over the truth. The independent work of human rights organisations confirm that the events of November 1984 were pre-planned and in doing so support the theory that Beant Singh and Satwant Singh didn’t assassinate to seek revenge, but rather attempted to stop the impending onslaught.

As Sikhs across the globe will come together to commemorate 30 years since the genocide, there will be some that find solace in lighting candles and some will place their efforts in signing petitions to ask other States to recognise the events as genocide. In the same way 12 “independent” commissions have failed, lighting candles and signing petitions have proven ineffective to challenging the State narrative, which has been the ever present hurdle in seeking redress.

A more proactive approach to tackling the issue would be challenging the State narrative. Putting pen to paper not only helps provide clarity of thought but also highlights the flaws evident in the State’s version of events. The selective use of words such as “riot”; the erroneous death toll; and the continued reluctance to mention the independent findings, all need to be addressed. Until the Sikhs challenge the “official” narrative and take charge of their own history it will remain a product of State fabrication and manipulation.