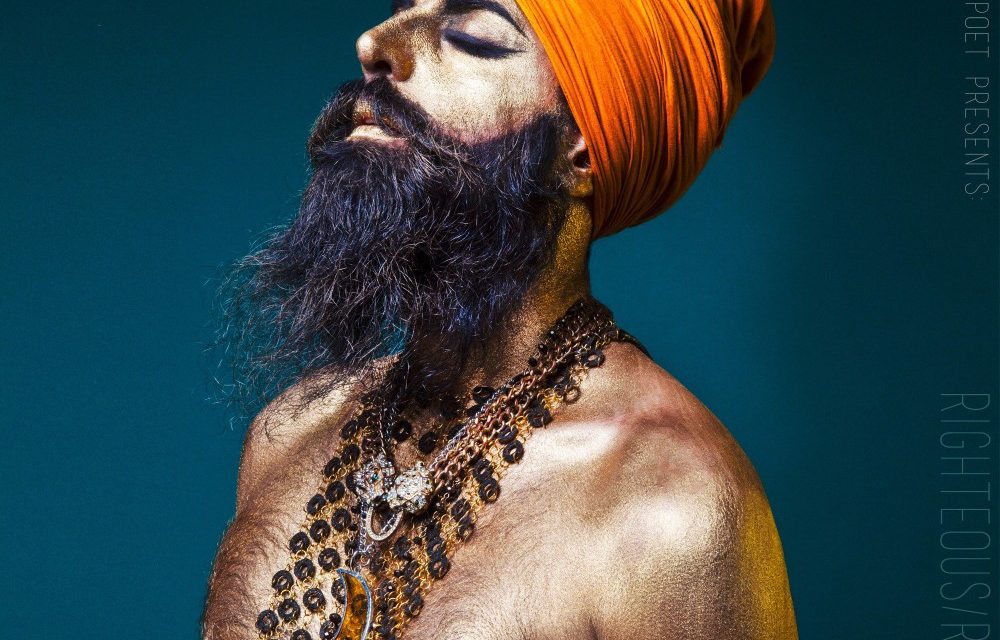 Humble the Poet has experienced a rapid introduction to mainstream audiences over the last few years thanks to his two ‘UNLEARN’ books, youtube vlogs and thought-provoking social media musings. His audience today is some way removed from that which was first attracted to the outspoken Kanwer Singh from Toronto whose three digital albums and umpteen music videos gave a voice to brown, predominantly Sikh audiences in the early years of this decade. Although there have been musical releases since the days of the ‘Believe Me Music’ movement, I’d started to wonder if major hip hop records were no longer a priority for Humble the Poet, what with the varied projects he has taken on. I need wonder no more, as summer 2017 sees the release of EP ‘Righteous/Ratchet’; so what’s it all about?

‘Righteous/Ratchet’ is a 6 track release from Humble the Poet that signals he is still wholly invested as a rapper with plenty to say. There are five records on this EP complimented by an acapella to conclude what is less of a continuation of this artist’s musical journey, and more of a public announcement redressing the likes of me who’ve been wondering where he had gone. With every past original production, the musical composition was usually of a professional standard, but on this EP it attains a higher standard still, emulating a sound that isn’t out of place on any hip-hop radio playlist. There is a commonality to the sound of the EP despite it being the work of three different producers which is in part a testament to the overall supervision of the artist himself, as well as the ability of those creating the music.

Opening the EP is what I’ve read described as the standout record on the EP, the enchantingly titled ‘I will’ produced by Sickick. At some points I was clicking rewind repeatedly to hear the lyrics this “son of a cabbie rapper” was spitting, and reading in to what or who he might be speaking about. Rather than throw an uninformed spoiler into this review, I’d suggest you give the track a spin and hear for yourself. It is of course a track that you can simply listen to without thinking too hard and makes for good conversation music as the sun sets when you’re beginning to unwind, switching over to artificial lights and watching the city night life unfold from your penthouse balcony. Am I sounding too specific? Seriously, give the track a spin and tell me that’s not the imagery that crosses your mind. (OK, maybe it’s just me yearning for a return to Irving Street.)

Two of the tracks are produced by Keith Rice aka KinG! titled ‘H.A.I.R’ and ‘YOU’ respectively. ‘H.A.I.R’ is what I’d call a luxury track that the strength of Humble the Poet’s other records allows him to make. It’d be insulting to call it experimental, but there’s something about a number of the lyrical phrases employed and vocal style on the chorus that unsettles me. Maybe that’s the point? It’s not new, I’ve felt it in some of his previous works – a deeper vocal recorded as if the artist is channelling Barry White. In this EP, it adds to an audible journey that I’d recommend playing in numerical order, throwing you off just when you think you’ve got him figured out. I could say the same for ‘Booty Pics’ (no, not simply because of the title) which is produced by long-time collaborator and fellow Canadian Sikh Knowledge who also provides choral vocals on this track. Humble exclaims “brown boys don’t blush, but I did for you” leaving me thinking that I need to hear the track a few more times before deciding what it’s really about. Sikh Knowledge also takes the helm on ‘Mrs Doubtfire’ which drew the least attention for me; the chorus was too direct and lacking subtlety which sullied some of the depth found in the verses, notably “why am I feeling guilty when the good shit happens?”

What’s clear to me throughout though is that the Humble the Poet whose unapologetic attitude and hard-hitting lyrical content made him a celebrity for a generation of brown people in the west is still very much alive. Nowhere is this more obvious than in the acapella ‘Blame Muslims’ which could easily have been the subject matter of a vlog video from his early youtube days (maybe I should search the origins of this one out in those humble black and white productions). “I don’t blame every priest when one touches a boy”. Glad to hear it; maybe in a similar vein I should not expect to hear ‘Baagi Music’ every time I see his bearded face in a music video. It’s grossly unfair to pigeon-hole any artist, least of all one who provided a record that will get replayed by a generation every time they want to stick up two fingers to the man. Humble the Poet is, like all of us, on a life journey that takes him down a winding road, growing and building on what he has experienced before. ‘Righteous/Ratchet’ let me hear how he’s getting on and I can’t say that I’m disappointed with where he’s at, musically or otherwise.

‘Righteous/Ratchet’ is available to download on iTunes and to stream on Soundcloud.