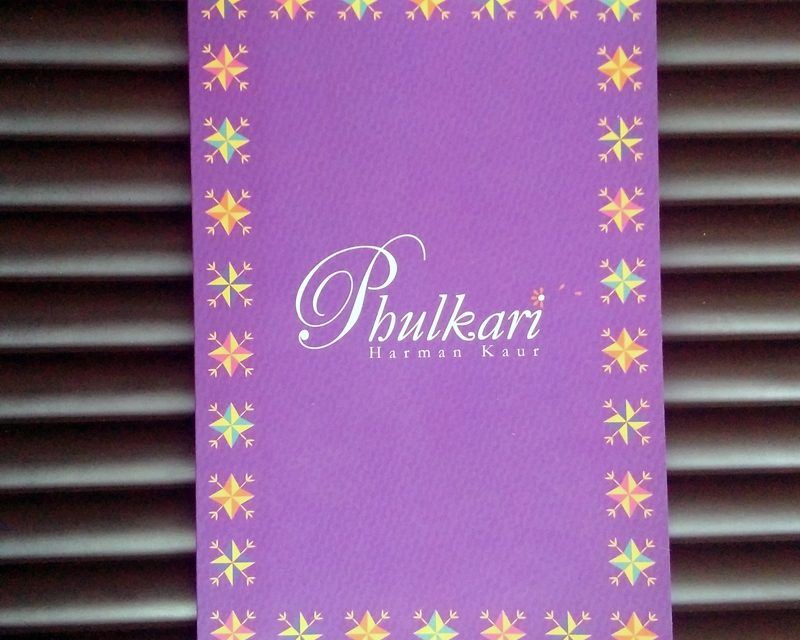 Over the last month I have been reading ‘Phulkari’ by Harman Kaur, a collection of poetry and prose put into print for this poetess’ debut work. Available to buy online, ‘Phulkari’ is an English language anthology created by a young, barely twenty-something, turbaned female residing on the west coast of Canada. Occupying a space and time that sees its fair share of violence, minority-bashing, and community organising, I was intrigued to read her insights – how would she balance out the Sikh, Punjabi, Canadian and Milennial influences that pervade a generation’s lives?

Harman Kaur is a writer and spoken word artist from Abbotsford, British Columbia in Canada. I have followed her posts and musings on twitter for some time now, engaging with her occasionally, but unaware that she had been building up a body of work that was going to go into print. As an irregular user of instagram, I was oblivious to the following that Kaur has begun to develop; it’s not uncommon to see carefully curated words shaped artistically, juxtaposed with imagery that impels young thumbs to hit like, follow and comment, so the statistics usually mean very little. But having read some of her more thought-provoking pieces on social media, I was genuinely curious about what would come from this self-publication. The book is depicted as, “a collection of poetry and prose that explores themes such as grief, identity, love, spirituality and healing. The themes specifically relate to the complexities that come with being a woman, a Panjabi, and a Sikh.” Lofty ambitions when you think about it deeply, but at the same time this left me expecting more of what I’ve read elsewhere previously. That expectation was well and truly shattered.

‘Phulkari’ is a thoroughly refreshing body of poetry and prose that covers a number of bases without making the reader feel that the author is making a home run – that’s not a negative, in fact far from it. This is folk art, just as at home being read aloud in a Gurdwara Punjabi class/Khalsa school on a Sunday, as it is on a more sizeable stage to a captivated audience. The language does not shy away from using vocabulary and references that are familiar to any Sikh or Punjabi household, nor is the love for Guru and Divinity devoid of the sentiments you hear and feel in the comfort of your familial surroundings. As I turned the final pages for the first time, I flicked back to the beginning to go again, and having had time to digest what I’ve now read numerous times, I conclude that this is a first step of what will (I hope) be many forays into creative wordplay by Harman Kaur on the printed page. Sikh poets, certainly those writing in the English language, have traditionally been best experienced over a multitude of committed (put to print) works, rather than the few. It allows a reader to bear witness to the journey taken by the author; their maturity and intellect enhanced with each passing year allowing the innocence of youth to give way to the inevitable reality that comes from nearing a certain mortality.

As a publication one can’t fault the design (c/o Prabh S Dhillon), the layout of words, and the feel of the pages. That is something that will no doubt be built upon in future works, but I for one hope that is done subtly as the words took on a more directed focus because of the design’s simplicity. (Perhaps the lack of a publishing house with their attached rounds of draft and redraft also added to that feeling.) Split across six sections, ‘Phulkari’ touches on everything from male mental health to the anxiety of pregnancy, speaking on love, death, migration and more. There are words of wisdom, guidance, and pockets of ‘reminders’, but presented in a style that does not preach all-knowingly. The unencumbered nature of ‘Phulkari’ permits Harman Kaur to speak on her Sikh experience without the need to transform her terminology; selected works are given dual titles with the first being iterated in the Gurmukhi script. Yet she balances her ‘Sikh’ work with those of her ‘growing-up pains’ well, not allowing either to dominate or delineate who she is as presented through her words. Her pieces on Worldly love were intelligently crafted, in part alluding to the pangs of separation faced by the soul-bride from the ultimate soul, without destroying the essence of what most will read as the breakdown of a relationship or unrequited love. There is philosophy behind the words that belie Harman Kaur’s age, much better appreciated upon reading the concise foreward that introduces the book and not something that I am going to spoil for any prospective reader. The price point of ‘Phulkari’ may hamper some readers from getting hold of a copy, though I wouldn’t forget it entirely as this is the kind of work that could make its way into community libraries – and will do for us here in selected parts of the UK.

Social media has given birth to many differing types of creative artists, particularly from amongst communities (and their members) who have otherwise effectively been expected to plod along in silence. Poetry, specifically spoken word written and performed by females of colour is perhaps one of the most recognisable of these offspring, but mass appeal resulting from mass attention brings with it considerable criticism and unfair stereotyping of the work being created. Brown poetesses face mockery in comments, direct messaging groups and of course twitter, without so much as a word being read, usually centring on the meter and visual format of their poetry. To do so with Harman Kaur’s work in ‘Phulkari’ would be a mistake, not only because it would prevent oneself from the delight of experiencing a thoroughly stirring body of poetry and prose, but because this may be the harbinger of a direction that others’ creative endeavours look to emulate in the future.