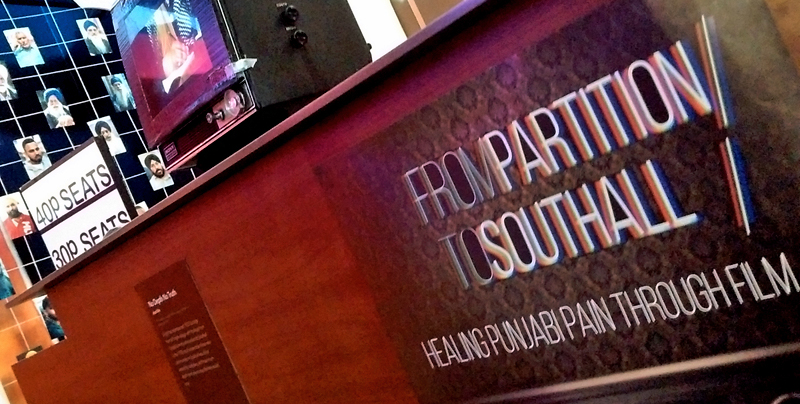 With 2017 commemorating seventy years since the Partition of Punjab and the creation of the Indian and Pakistani states, British institutions have been exploiting the anniversary to reap remuneration from the brown pound. It is in this context that the British Film Institute (BFI) has been celebrating the diversity of Indian filmmaking and films throughout the whole year in a series titled India on film. They have however also given over space for a number of free-to-visit exhibitions that would delight the casual South Asian cinematic film goer as well as provide a voice to those of us left wondering whether we even existed back then. The UK-based spoken word poet, artist and filmmaker Narvir Singh bravely takes on this mantle in what is his first solo exhibition.

Titled ‘From Partition to Southall’, Narvir Singh envisages an immigrant from the Punjabi community, a Sikh at that, in the 1970s, dealing with the daily struggles of life. Set in Southall, an area where many immigrants have found sanctuary over the years, this mixed-media exhibition contrasts the tension between the pressures of survival faced by the Diasporic communities and their dreams for artistic freedom. Drawing upon his family’s experiences, Singh sets out to explore the impact of immigration on the personal identity of successive generations in the Diaspora. He uses a variety of media, including film, poetry, photography and visual art to depict an often unspoken story of what Partition resulted in.

The exhibition hosts two video reels, collating archive clips and narrating them in a challenging timeline that shows how the impact of Partition on many continues to be ignored. These are anchored by photography, song and objects to create an environment that is both authentic and substantial. A sense of victimhood is uniformly applied to those who made the horrific journeys from East and West Punjab respectively, as well as to those who suffered from related violence and fatalaties, but what of the impact on those whose nationhood was stripped away from them, and were forced to resettle in foreign lands where they were met by the foot soldiers of the right wing and the lengthier death sentence of assimilation? Singh artistically provides a lens into this experience with insightful notices directing the viewer (or voyeur in this case) through three distinct areas. The sounds are cacophonous, the peek into the protagonist’s mind subliminal, and the symbols of struggle everywhere. This is not an exhibit to rush your way through before catching a film screening; time is needed to digest the complexity of what is a vast period.

The setting of the exhibit has been created by the Wimbledon College of Arts and Singh uses it to good advantage. If you are confused at any point, pause and reflect; it is vital to read each of the labels (white text on black notices) carefully before engulfing yourself in the ranging experiences being presented. This is not, nor is it meant to be, a definitive Punjabi migrant, or Sikh experience of the upheaval that came with leaving behind the Punjab and settling in Southall. It is at the present time however, one of the solitary voices that is unhindered by State influence and indicative of what is being said by many who are the products of Partition. This exhibition should be experienced and discussed, and I sincerely hope that as many of our audience that can, will do so.

‘From Partition to Southall’ is on at the BFI in London until Thursday 17 August from 12pm-8pm. Once inside the building head down the few steps towards NFT1/NFT2 and the exhibition is immediately on your left. Narvir Singh can be found and followed on Instagram.

From Partition to Southall – Promotional Video from Narvir Singh on Vimeo.