“What’s beef? Beef is when you make your enemies start your Jeep” rapped Christopher Wallace a.k.a. the Notorious BIG in a record released three weeks after he was shot dead in LA, California in March 1997. At the height of the infamous east coast – west coast rivalry and just six months after the murder of west coast rapper Tupac Shakur, hip hop mourned the loss of another one of it’s greats seemingly killed because of the intense animosity that had developed between two sides of the same coin. Differences of opinion, disagreements and wholesale miscommunication robbed the music world of two of its brightest stars who had once collaborated and called each other friend. And it is precisely the inability to deal with differences of opinion, the failure to settle disagreements and a lack of appropriate communication that escalates ‘beef’ the World over.

There is nothing like competition to bring out people’s darker side. In the South Asian community, we see this every weekend at family functions or sporting events and this past weekend has proven no different. An open invite bhangra competition, Bhangra Wars saw eight teams paired up by the organisers to compete against each other as well as dance for an overall title of champions. Judging a bhangra competition is a particularly arduous task as interpretations of the rubric (marking scheme) differ from individual to individual, but still many dancers respect the final decision, satisfied instead with the publishing of their performance instead on Youtube for the World and sundry to decide how well they did or didn’t do. There are however a minority who will use the opportunity to take aim and fire accusations across at either judges, organisers or most often opposition dancers, usually where there are previous grounds for dispute. Disagreeing with somebody else’s point of view is not a problem of itself though; we are free to disagree with fellow human beings just as we are free to agree with them. It is how we present our opinion that is of importance and can escalate an otherwise simple parting of views into a confrontational and intimidatory rivalry.

I have to confess that I am no stranger to this. On at least two occasions I have allowed Facebook comments to become a conversation which rapidly becomes a confrontation and then becomes ‘beef’. Fortunately, both myself and the other parties involved have seen sense to resolve the disagreement by talking in person. It does not however always end as cordially. Social media is not a helpful tool for debate. Quite often, thinly-veiled attacks can be met with more sensitivity than we otherwise expect because of the very public nature in which they are made. In recent years the use of graphical elements such as memes have only further exacerbated that problem. What one person sees as a harmless quip can be interpreted as a serious insult. It is in part, the one-sided nature of social media that causes this miscommunication – there is no reading of body language, no looking into one another’s eyes, no hearing an actual voice and quite often a limit placed on words and characters that debilitates our power of communication. Of course meeting in person to talk things out is not always possible and to try to solve this for bhangra dancers in the UK we established an online discussion forum some years ago. The hope was that as members would discuss with each other regularly on NachdaPunjab.co.uk they would cease to see one another as a rival and more akin to fellow dancers who sometimes see things differently. In some cases it has proven invaluable particularly when we started out as there was a fresh impetus to talk and meet with other dancers. But for a range of reasons it has gradually proven less successful with minimal conversations over the last year, matched by a similar waning attendance at quarterly meet-ups that were established to encourage talking to one another face to face. It is an underused resource but will continue to exist as long as we are around, providing space for healthy discussion, facilitation and even conciliation, as even if it helps a minority of dancers see beyond the one-sided circles that are their whatsapp threads, it will have done its job.

‘Beef’ can also become quite divisive as some people use it to draw battle lines and force others to take sides, labelling them based on who they back. The east coast – west coast rivalry in hip hop was enflamed in this way by those who stood to benefit and whose hidden agendas were served by diminishing a rising voice of black youth. Worrying similarly, although altogether at a drastically smaller level is the brewing ‘beef’ between two Sikh/Punjabi Youtubers, stoked further last night by a new video from one, AKakaAmazing which has prompted an increase in animosity not just between he and the other, fellow Youtuber Jus Reign, but it would seem also some of their supporters. It is beyond the scope of this article to do more than touch the surface of this issue but it is hard to ignore any longer.

It is important to note that both Youtubers are comedians although at quite different ends of the spectrum; AKakaAmazing is a sharp-witted social commentator who pushes the boundaries of comfortability with both his subject matter and attitude, whilst Jus Reign is a more light-hearted entertainer, revelling in situation comedy that is sometimes of a farcical nature. Both have their ardent supporters and are humorous in their own way; quite where the rivalry stemmed from is not widely talked about but it’s existence is now undeniable. In the video published last night titled ‘Internet Police‘, AKakaAmazing covered a selection of embarrassing videos featuring Punjabi or Sikh people that have been shared online in the last month. In two separate segments he ridicules Jus Reign, firstly for his over-excited video after being tweeted by Zayn Malik (a teenage boy band member), and secondly for purportedly inspiring a young patka-wearing boy to dance in an embarrassing manner.

In the first instance one would have to say that AKakaAmazing is wholly justified as it fits well within the subject matter and targets of his new video. Everyone will have their own opinion of Jus Reign’s self-depicted ‘fan-girling’ at the tweet mention from the young boyband star, but surely he himself will accept that it will be held up for ridicule by some. Whilst he might enjoy receiving twitter attention from a celebrity boy-band member – for which there is no shame – others will see it as less than fashionably acceptable for a grown man and a Sikh role model to boot. AKakaAmazing’s style of comedy means that the manner of the humour directed at Jus Reign was always going to be less than subtle, but of itself in this instance it perhaps would not have enhanced the rivalry. It is the second instance in which he mentions Jus Reign that seems to have caused the most offence – a matter drawn to my attention on my Twitter feed this morning. An anonymous tweeter asked why I had re-tweeted the video when it “mocks Sardars so openly“. Slightly bemused I replied that I had shared the link as soon as I saw an exceptional music video and song titled ‘Degrees of Freedom‘ featured in it by Canadian artist Noyz which we alluded to in the afore-mentioned tweet. I couldn’t recall anything that mocked Sardars and asked for the reference point which I have since watched back. In ridiculing a young Sikh boy who gyrates horribly in an online video apparently attempting a popular dance, AKakaAmazing points to a previous music video by fellow Youtuber Jus Reign which might have inspired the young boy and comments that he is “…corrupting gyani’s with this shitty-ass music…” It would appear that use of the word ‘Gyani’ here is the insult. I fully understand that people of a certain age now feel that being termed a ‘gyani’ is an insult (which we can discuss another time) and I am certain that on some occasions it is meant to be used as an insulting term. However, in this situation I really don’t think that it should be used in such an emotionally-charged way to encourage others to reject AKakaAmazing’s video or to opt for a side in this plate of ‘beef’. If one wishes to look for a ‘Panthic’ insult that demands response or at the least needs to be ridden of support, there is no shortage of examples as our writers have expressed on numerous occasions. However our work in that regard is altogether ignored by the masses as is the work of many other Sikhs. If this instance and its like is the challenge to which we must now devote our activism, then Sikhs will truly be marginalised and disregarded for many decades to come. Perhaps AKakaAmazing shouldn’t have used the term. But that is no reason to be drawn to take sides in this way. 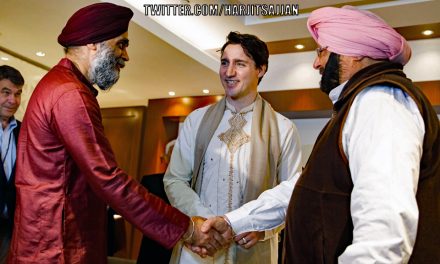