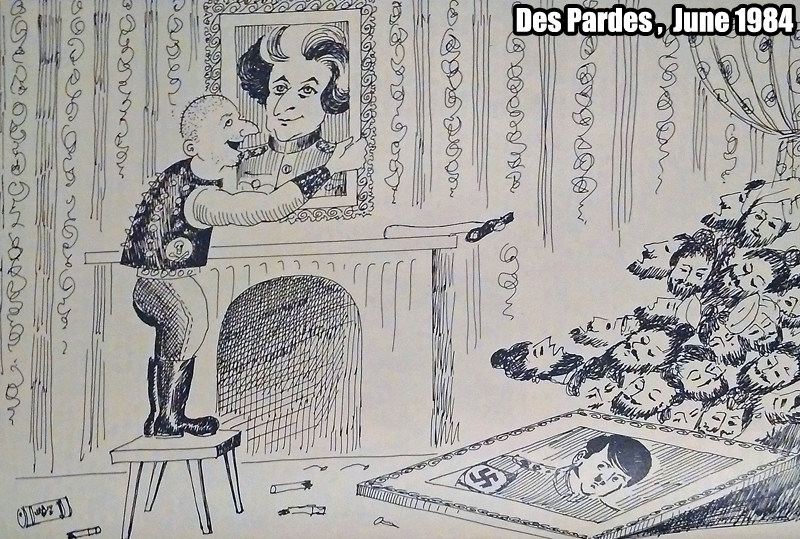 The assassination of Indian Prime Minister Indira Gandhi on 31 October 1984 by Bhai Beant Singh and Bhai Satwant Singh was overshadowed by the rushed instigation of Operation Shaanti that followed – the planned Genocide of Sikhs by the State. Every November in the 32 years that have followed, Sikhs across the globe have understandably remembered those who were systematically targeted and massacred in the days that followed, meaning that the assassination and its reasoning has been diminished. Is it time for us to give more prominence to the salvo that ended Indira?

Although less controversial in Sikh circles than other happenings in recent history, the assassination of Prime Minister Indira Gandhi remains spoken about in hushed tones. There are some who feel unsure about how they should feel commemorating, or even celebrating, the execution of an ‘elderly woman’; others silently or subconsciously question if the Genocide that followed would have occured had Gandhi not been assassinated; and then there are some who ask if we can satifactorily laud bodyguards who did ‘anything but their duty’ that fateful morning. That these questions arise in the minds of Sikhs in Delhi, Punjab and the West, shows how little we understand about our recent past, and the relationship between the Indian State and the Sikh nation.

The reality is that we as a community spread all across the World have yet to accept that Sikhs are in the midst of war. From 1984-1992~ this war was fought with arms on battlegrounds across the subcontinent, but predominantly in Punjab and Delhi. The assassination of Indira Gandhi was an early, unexpected act from a community that had been grossly under-estimated, as seen in the prolonged invasion of Darbar Sahib months earlier, however it should have come as no surprise as Sikhs have always punched above their numerical weight. Bhais Beant Singh and Satwant Singh understood that this was a war; their conscience did not allow them to remain idle, intoxicated by black-and-white choices of duty or rebellion. Our lot today as Sikhs wherever we reside, would be better off were we all so blessed in our perceptive capabilities. Perhaps we would give due accord to the 20th century’s Bhais Sukha Singh and Mehtab Singh, and apply their thinking to our own realities.

In the aftermath of the invasion of Darbar Sahib Amritsar, Sikh sentiments for Indira Gandhi and the Indian State were contrastingly unambiguous. The cartoon featured in this article is taken from the June 1984 special edition of the weekly Punjabi newspaper Des Pardes, published and distributed in the UK. It shows a skin-head (presumably Nazi) removing a portrait of Adolf Hitler from his living room wall and replacing it with one of Prime Minister Indira Gandhi; in the background decapitated heads of Sikh men are seen. That edition of the newspaper was replete with full page adverts from conceivably every Gurdwara in the UK, announcing Akhand Paath services in memory of Sant Jarnail Singh Bhindranwale and all who were martyred with him. The editorials were unequivocal that this was an Indian act declaring all-out-war on the Sikhs, and cartoon images like that featured above, and those below, pointed the blame squarely at the ruling Government. Whilst some might consider this a reactionary position brought on by emotional upheaval, I’d beg to differ; Sikhs at that time were not yet confused by the propaganda and misinformation that was to follow, promoted at every opportunity by the State and upon every mention of 1984 until the modern day.

In light of what they then knew, Bhais Beant Singh, Satwant Singh and Kehar Singh, seized an opportunity afforded to them. As such, they were and should rightly be celebrated as heroes. Today, the Genocide centred in Delhi is almost all we consider – it is the easier moment to shout about. But that salvo on the tyrant head of State demands our attention. 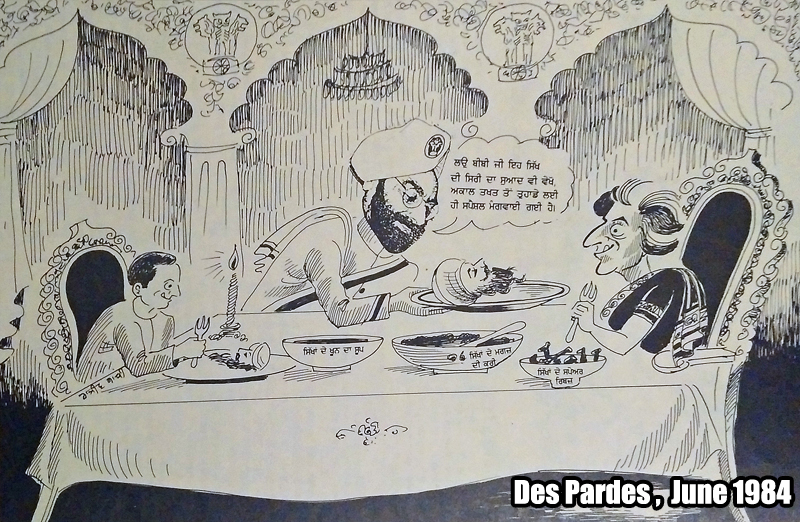 This cartoon depicted President Giani Zail Singh serving a ravenous Prime Minister Indira Gandhi with the head of a Sikh which he says has been brought especially for the meal from the Akal Takht. Sat at the other end of the dining table is future Prime Minister Rajeev Gandhi. 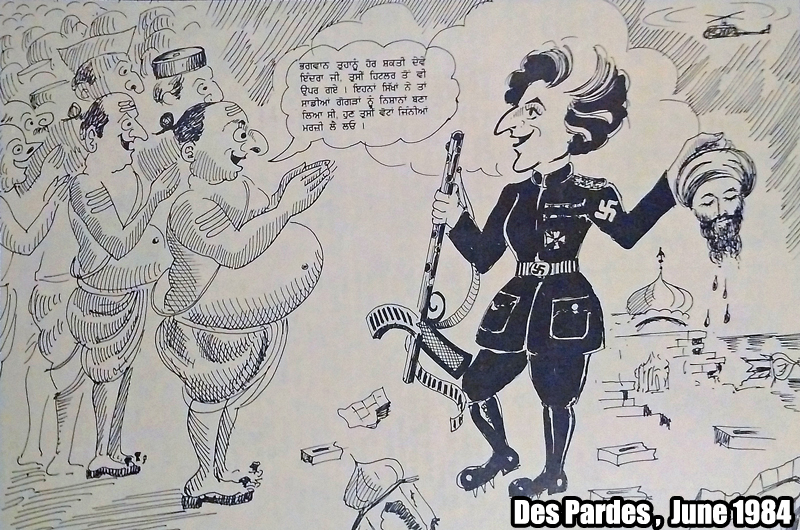 This cartoon showed Prime Minister Indira Gandhi dressed in a Nazi uniform holding the decapitated head of a Sikh as she is lauded by Brahmins who exclaim that she has surpassed even Adolf Hitler as a tyrant and can count on their vites forevermore. 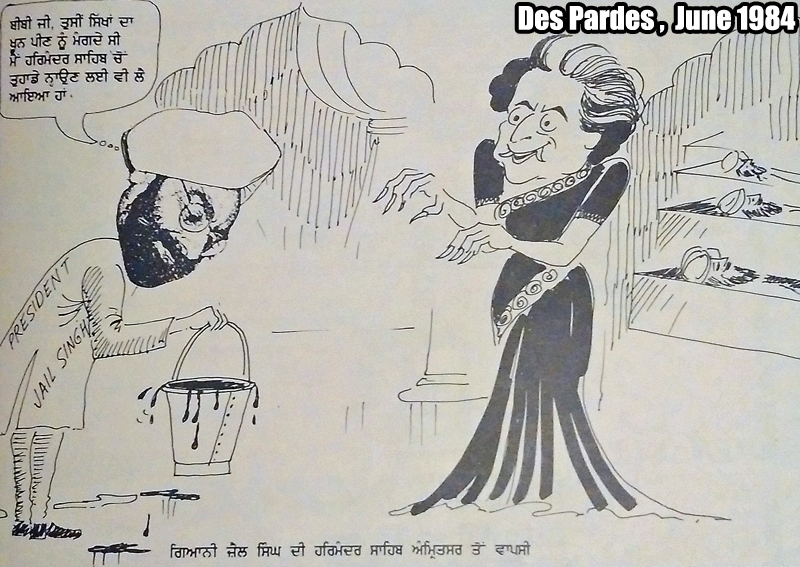 This cartoon showed President Giani Zail Singh once again, this time carrying a bucket of Sikh blood brought from the Akal Takht for Prime Minister Indira Gandhi to bathe in.