The Abuse of Power 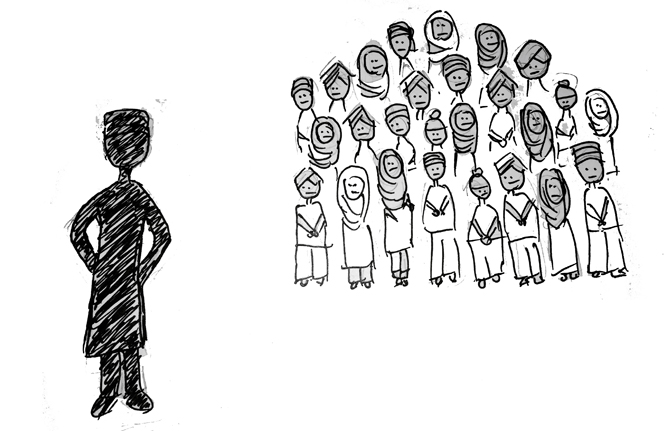 The abuse of power burdens the individual in all facets of society, whether the issue is Bapu Surat Singh’s hunger strike and it’s suppression by the state, the police excesses that continue to defile the relationship between Blacks and the American justice system (as seen most recently in the case of Sandra Bland), or the abuses that take place in the name of religion. This problem is endemic in the Sikh community, whether it is a Gurdwara committee acting dictatorial, an organisation behaving as if above reproach ignoring the needs of those it serves, or most frighteningly and least talked about: individuals within families or groups experiencing domestic violence and/or sexual abuse. I consider myself an advocate of the Guru’s philosophy of sovereignty and I see no difference between challenging abuse of power and the pursuit of sovereignty. A central idea within the Guru’s philosophy is the relationship between power and the individual.

Of the issues mentioned as examples above, the one that is guaranteed to make people uncomfortable and feign an almost meditative silence is sexual abuse. The experience of sexual abuse can fundamentally alter your perception of self and the relationships you develop throughout your life; as well as impact your emotional and mental wellbeing. This issue is so taboo that talking about it is akin to blasphemy and being a victim is perceived as perhaps more of sin than the act of abuse.

Earlier this year I heard a recording of a conversation taking place between a parchaarak (preacher) of a well known group and an 18 year old male. As I listened to the recording with my wife I remember saying, “I have a horrible feeling this is going to be seriously messed up“. I was dumbfounded by what I heard, outraged that an ostensibly learned individual would distort Sikh concepts to create such a perverse interpretation.

As the saga played out and social media commentary exploded, people split into two camps. A surprisingly large number of individuals (small compared to the mass following of the parchaarak) came out to condemn the narrative they had heard in the recordings (more recordings emerged later). For me the turning point came when the parchaarak and his group went on the offensive, issuing a statement claiming the recordings had been doctored and that the boy had entrapped the parchaarak by asking leading questions. The group attacked the identity of the alleged victim by asserting that he was a nobody, without any Sikh provenance. This offensive position and the rubbishing of the allegations and the victim himself, not to mention the recordings I had heard, left little doubt in my mind that the victims cry for help must be heard and this abuse of power challenged. During this time I was fully aware that I could be completely wrong and maybe my instincts were wrong, but the words of Guru Nanak shone in my mind:

They reminded me that my position was always with those who had no power, no voice, those who struggled to be heard. The victims always deserve to be heard, their cries for help have to be answered, and the distance between the great and small has to be reduced so that dialogue and recourse may take place.

The little doubts I had to speak up evaporated when the group committed a cardinal social media sin: they filtered their news feed, removing the vast majority of the dissenting comments. Censorship and truth cannot coexist. As a result, the dissent became ferocious; those on the sidelines began picking sides. The censorship continued, this time more nuanced; a few comments were left that suited the group. What had now become the mantra of the dissenters, ‘the recording was not edited’ resonated amongst the comments. Following this, things became murky; the group stepped up their offensive, statements were issued, names were dropped, names were withdrawn and statements edited. The group entrenched themselves within the power structures of the Sikh community, the familiar narrative of power played out: those that wield power seek to protect it at all cost as they have the most to lose.

The actions of those with power are not surprising, in fact they’re almost always ‘text book’; the reaction of the Sikh community however has always proven to be disconcerting. The Guru continually educated the Sikh that true power is within the collective, the Sangat, so long as they remain stoic, intelligent and motivated by objectivity and realism. Unfortunately this is not the case today.

The followers of this particular group, like many followers before them, confused power with legitimacy. They were encouraged by the overt show of force and claimed the parchaarak to be messiah-like, presenting his service to the panth as a shield to the allegations. The standard remarks that facilitate the hiding of abuse flowed: “it should have been discussed in private”, “the victim is a lair”, “he (the parchaarak) is a gurskih he could never do this”, “the recording was edited”, “I can’t believe it, it’s not true”, “why do Sikhs love doing each other’s besti”, and my personal favourite: “how can you question a parchaarak, you’re not a Sikh, you’re an enemy of Sikhi who hates parchaar”.

It later emerged that the there had been a meeting, before the issue became public knowledge, in which a large number of well known and well respected individuals had been present. As is often the case, our leadership attempted to hide this issue from the wider community with the pretext of resolving this ‘internally’.

The parchaarak admitted in the meeting, as acknowledged by those present, that what was said in the recordings was contrary to Sikh teachings. A decision was made that his activity would be suspended until the parchaarak presented himself before the Panj Pyare who would decide something, in some secret meeting, somewhere, allegedly(!) Much about this meeting is contentious, the accounts of those in attendance vary wildly, from complete vindication of the parchaarak to cult like anti-gurmat behaviour. But some truth emerges amongst the misinformation: the group claims that there was no need to present the parchaarak before the Panj Pyare as no “bhujjar kurehit” had been committed. So it’s logical to assume there is some truth in the decision of this meeting. The parchaarak, like all those who enjoy power, flouted any attempt to curtail his power and conveniently moulded a religious concept to meet his needs, eerily reminiscent of the conversations in the recordings.

As expected and awaited by those in power, the clamour died down, people continued with their lives and this story of abuse retreated behind a veil of silence.

Over the last few days the parchaarak’s media team and his lawyer have made statements claiming absolution by the police. His supporters take this further and claim divine exculpation. Serious questions remain unanswered and the involvement of Sikh organisations needs to be scrutinised for us to fully understand how the abuse of power remains unchallenged. The Sikh Council UK set up safe guarding procedures (Safer Sikhs Partnership) for organisations within the Sikh community last October, an applaudable initiative, but one that does not go far enough, and which was only publicised following this incident. Ideally the Sikh Council UK, as a representative body that provides “collective leadership” should investigate such matters, independent of the police or perhaps with their support, and then provide answers to the Sikh community. Time and again allegations of abuse are met with disdain, awkwardness and complete insensitivity to the alleged victims, and this needs to change. The Sikh Council UK needs to work diligently to clarify the outcomes of investigations into abuse and ensure the mechanisms they set up to challenge abuse of power are robust, independent and capable.

Accepted truth should not be the domain of those with large resources and cohorts of zealous supporters. These are the very dynamics that the Guru sought to abolish. As a community we should be able to deal with these issues comprehensively, not leave them to the realm of gossip or public shaming of victims and those that step up to provide support. We need to set a precedent of dealing with taboo issues comprehensively; we need to fill the void in effective Sikh leadership and leave no room for abuse of power. We need to create effective mechanisms to safeguard children and other vulnerable individuals. We need to demand that Sikh organisations are accountable to the people and serve the people, and not try to distance themselves and shelter those with power.

I contacted Sikh Council for comment and they distanced themselves from this case; “Sikh Council UK has not been involved with this matter in any substantive way and we are not therefore in a position to comment meaningfully on your concerns“. The Sikh Council UK owes it to the community they claim to lead and represent to clarify the serious and outstanding issues outlined below.

Originally the parchaarak claimed the recordings were edited, a claim made in an online statement. Serious questions continue to arise regarding the conversations that the recordings present and the groups vehement denial of their authenticity. Whether they were doctored or are unedited needs to be clarified, and contents of the recordings need to be fully explained.

It has been established that the parchaarak, at that confusing panthic meeting, admitted that what was said in the recordings was contrary to gurmat teachings and that he would present himself before Panj Pyare before katha is resumed. Has this taken place, and if so what was the outcome? We need to be able to witness the mechanisms of power within the Sikh community, function in a way we can engage with. The Panj Pyare should issue a statement as they represent the justice of the Guru and are at the highest levels of the Sikh socio-political establishment.

Finally it is alleged that the police investigation concluded because both the individuals involved were over 18 therefore no offence had taken place as the relationship was considered consensual. However this does not mean, given the relationship between a parchaarak and a follower, that this was an appropriate relationship. This matter needs clarification.

The misunderstanding of illegal immigration

From slaps to mud-slinging