Something in the air

There’s a strange whiff in the air. At first I thought it was the dirty smell of burning garbage from the recent Divali celebrations but it’s something a million times more refreshing and clean. Some local folks and I are inhaling a deep breath of fresh air and it tastes sweet. We plan on exhaling it into a new voice that our community has solely missed.

A couple days ago I was invited to the University of Keele to present a lecture on ‘Sikh Culture and Contemporary Examples’. It got me thinking more and more about the sudden intense progress of Sikh culture globally in the last five years or so, particularly in North America. I touched on my exploration of culture and how the fight between ‘culture’ and the Sikh way of life is misunderstood and does not actually exist because there is a Sikh Culture. It encompasses our Raag Kirtan, Dharmik Geet, Dhadi Vaars, Hip Hop; the literature by Bhai Vir Singh, Sirdar Kapur Singh, Professor Puran Singh; the paintings of Sobha Singh, Kirpal Singh, Kanwar Singh Dhillon; and even the architecture of our Gurdware and Takhts. I went on to express my belief that a Renaissance is taking place and we could all be part of it.

In 2009, the Sikh Activist Network in Toronto created an open-mic night called ‘When Lions Roar’. It enabled the community of the Greater Toronto Area to come together and share their experiences, knowledge and ideas amongst all levels of the community. Following on, Lahir in New Jersey created a similar space and recently so did an event called Azaadi in British Columbia. A forgotten event which seems to have now completely disappeared was ‘One Panth’s 1984’, but it fascinates me still as those in power went out of their way to create some real propaganda against it. That particular video is like watching a hilarious news report from Chris Morris’ Brass Eye but with much poorer acting! But it taught me a very important lesson. The expression of our voice on any platform in the Diaspora clearly scares the living daylights out of those who control the status quo in the land of the five rivers.

Examining our history, I was reminded of the poetry lounges (kavi darbars) that took place for centuries outside the Akal Takht Sahib in Amritsar. In my mind is seems like an age ago when our entire community was able to express themselves in a safe and secure environment, and not only that, but a place which is the very hub of Sikh activity – the ‘The Tower of Divinity’ (my interpretation of what the Akal Takht Sahib is). I couldn’t find an exact date when this stopped, but a friend said it was probably around the latter part of the decade of disappearances (1984 – 1994). It is therefore incredibility poetic to learn that the UK’s first Sikh arts event Saffron Mic has choosen Ensaaf as their charity this year to donate all funds to, who work on holding accountable the orchestrators of violence during this period of recent history. Topics on the night will be naturally tackling tonnes of taboos from domestic violence, to the homeless, to bullying to substance abuse within our community.

Our Diasporic-community now has the opportunity to share narratives collectively after a long silence. The endless operations and infiltration committed on the Sikh nation may have strangled our voice for a short period, but we’ve caught our breath again. Our lungs exhale messages of freedom using voice boxes built on compassion and shall blast back with the power to crack the smile of corruption and hate. Join us at Saffron Mic next Friday night. 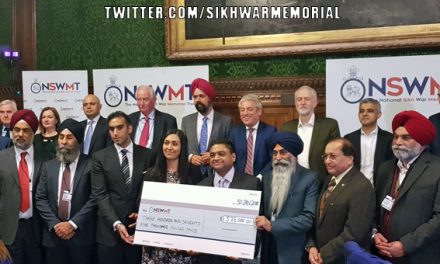 Do we really want a statue for Sikh soldiers?