Bhangra is not an Indian dance 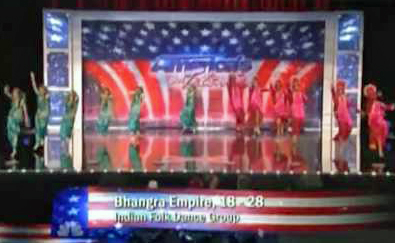 My sister recently attended her son’s multicultural celebration at his school. They live in a South Asian-populated community with a dominant, wealthy, non-Punjabi Hindu majority. Towards the end of the program the emcee announced that the audience would now get a glimpse of ‘India’s hip-hop’ dance… you guessed it — they were talking about bhangra. On comes the beating dhol and out come a cadre of non-Punjabi dancers trying their best to smile their way through some cheesy, Bollywood wanna-be bhangra music. All I could feel when my sister recounted this to me was a strong desire to throw up. Not because non-Punjabis shouldn’t be doing bhangra, but that if they’re going to do it, at least give the dance form some justice. Don’t call it ‘hip-hop’; Don’t use bastardised Punjabi music from Bollywood; and most importantly, don’t call it Indian.

This reminds me of the time a thoroughly whitewashed dance troupe called Bhangra Empire went on the reality TV show America’s Got Talent. When given the chance to build background knowledge for the viewers, the captain of Bhangra Empire said his team was about to perform an ‘Indian dance’. The captain was obviously trying to explain the dance in the most relatable terms that he could think of for the viewers, and most likely thought that calling it ‘Indian’ versus Punjabi would appeal to a larger audience. I agree that more people connected with him because he said that, but my problem is that he was being disingenuous. Bhangra is not an Indian dance; it’s a Punjabi dance.

It takes me back to the time I went to Himachal Pradesh with my husband (yes, that same Himachal Pradesh that used to be a part of Punjab but was stolen by the Indian Government because some of the populace were too afraid to admit that Punjabi was their native language too). Here’s what I noticed about people in Himachal Pradesh — everyone wears a kara. Now I know that the state is over 90% Hindu so this shocked me. Why do North Indian Hindus wear a kara? Are they ready to stand up for the Khalsa panth? Are they believers of Guru Gobind Singh’s philosophy? Or is it just because they desperately want to be mistaken for a Punjabi Sikh now that it’s cool? Once again, it’s a vomit worthy situation. Just as in the bhangra example, this is the white-washing of the Sikh identity. The Hindu majorities aren’t happy with their people’s history so they feel it’s okay to co-opt the symbols and traditions of minority people when it’s convenient. When it’s time to defend Sikhs or Punjabis however, these symbols and cultural appropriations are easily shed and Hindus are safely allowed to be Hindu again.

This article isn’t meant to further bloody the waters. I’m not trying to spread hate, just truth. If you are not Sikh ask yourself why you represent our culture when it’s convenient for you. Why not admit it’s not your culture and simply say that you are wearing a kara to resemble a Sikh, or going back to my nephew’s school celebration, dance to bhangra in homage to the Punjabi tradition? This situation goes both ways. If this is your culture, do you call your other South Asian friends out when they co-opt our symbols? Or do you call out your own people when Punjabi Sikhs try to fit into the larger ‘Indian’ community and downplay their heritage to fit in? I believe in honest cultural exchanges. But when one group has such an imbalance of power favouring them, it makes me sick that they don’t give minority groups rightful ownership of their cultural symbols and traditions.

The emcee who referred to bhangra as ‘India’s hip-hop’ should have taken the time to research the roots of the dance. The captain from Bhangra Empire should have done the same. I’d hope he reads this and understands that he’s almost famous – at least pay respect to the culture and tradition that brought you this far! And to the utterly confused Hindu population of Himachal Pradesh I’d like to say learn your history; your grandfathers decided that they were too embarrassed to be associated with the Punjabi speaking Sikhs of the country, wearing a kara is not going to fix this mistake. That the kara is a symbol of Sikhi, not Punjabiyat, is the next lesson they need to learn and the fact that people in Himachal Pradesh confuse this proves my point exactly – Hindus in India co-opt Sikh and Punjabi culture when it’s convenient and cool; they are dishonest about this theft and can easily pretend it’s no big deal whenever the situation calls for it. I’m here to say that I notice it and am going to call it out every chance I get. And if you’re a Sikh or Punjabi, so should you.

Money doesn’t say you love me