Who is at the top of the caste system?

Let’s get this out of the way. The caste system is horrible and should be obliterated. It has no place in Sikhi. It oppresses the vast majority of people living across South Asian countries and benefits the few. Just like capitalism, sexism, classism, racism, etc. caste is another structural system perpetuated by those in power in order to keep the masses controlled. No one here is arguing for this. What is arguable however, is the age-old tradition in our community of upper class Sikhs being faux concerned about the poorest of the poor in Punjab while using the caste system for their own benefit. Just like Donald Trump, they claim to be down with the people when in fact he is the very oppressor we should be protesting.

Here’s the setup I’ve seen over the past few years in academic circles: a Sikh ‘activist’ who comes from a long line of educated, super-wealthy community leaders decides to take on caste as the decisive dividing issue in our community. They turn into a speaker or scholar about the topic and continually connect all of the panth’s ills back to this divide. They claim that Jatts or Sainis or Khatris or whatever other label, are to blame for the serious issues we’re facing as a global Sikh community. You notice they blame everyone except the people who should be blamed – the people in charge. In other words, they blame everyone but the educated, wealthy elites. In more blunt terms, they blame everyone but the rich Hindu.

The problem with Punjab’s wealthy elites is that they’re all fundamentally beholden to the Brahmin. They have bought in to the lie perpetuated by the Hindu controlled media that the major problem in the Sikh panth is Sikhs themselves. The majority of elite Sikhs in Punjab have a slave mentality when it comes to India and this subservience doesn’t disintegrate in the Diaspora. So if you were well-to-do in Punjab and then migrated abroad, you continue believing the lie. You blame the Sikh for his own ills. You even begin to blame the Sikh for the caste system itself. Of course to a wealthy Sikh this makes complete sense. They have no major problems except those faced by other English speaking transplants around the world. Most of these ‘activists’ are city-dwellers in Punjab and their upbringings are compatible with the world abroad. It’s easy for them to look at immigrants from the villages as the ignorant masses falling for the caste system and thereby causing all our panth’s ills.

Blaming lower middle class Sikhs for ruining our community makes no sense. If there’s anyone within our panth who should be called out isn’t it the ones who have benefited the most from India’s social stratification? When I look around at the Punjabi Sikh Diaspora, the educated elite fit this description best. Meanwhile they’re also the people constantly doing the finger pointing. These are the people who haven’t faced any real problems in their lives – the multi-generationally educated, English speaking, Brahmin loving Sikh elite. These are the perpetrators of the myth that somehow the Sikh community is the cause of its own malaise.

I disagree with this ‘blame Sikhs first’ mentality. I believe the problems in the Sikh community stem not from us, but from the fact that Punjab is not free. In the motherland, children are taught to abandon their traditions in favour of assimilating into the larger Hindi speaking Hindu community. Any opposition by Sikhs is quelled by a Government prepared to torture those speaking out against it. As a result our people are not able to advocate for an identity free from the shackles placed upon them by the much more powerful Brahmin controlled society. Consequently, in villages across the region, the Hindu created caste system is in full effect.

How can Sikhs break free of these mental chains without any safe access to the truth while in Punjab? It’s like blaming African house slaves in America’s deep south in the 1850s for what field slaves were going through. Really? I think it’s the damn master’s fault. And in this case the master is the Brahmin and anyone within our own Sikh community not prepared to stand against him.

Honestly, the solution to ending inequality in the Sikh community cannot come from the mouths of multi-generationally, privileged elite. No poverty stricken oppressed person will take their opinions seriously. Instead, I believe the revolution rests in the hands of not only the rich, but the Sikh Diaspora as a whole. Whether rich or poor, Sikhs abroad have to recognise their responsibility in helping disseminate the truth about India’s prejudiced policies without falling for the trap that Sikhs are the leading cause of their own troubles. Just as the white man is the puppet master abroad, so is the Brahmin in control across South Asia. Instead of being his slave, let’s learn about our history and see our existences as more than what India is trying to turn us into. Let’s look beyond India’s attempts to destroy the Sikh. Let’s break the chains and rise up together. Freedom begins now. 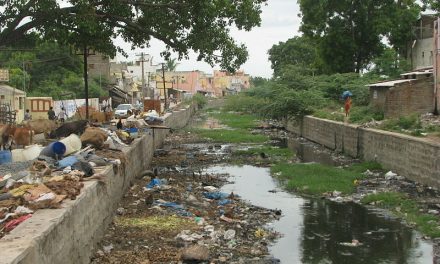