A Guru Granth Sahib bir was stolen from a Gurdwara in Burj Jawahar Singh Wala, a village a short distance south-east of Faridkot. Local villagers reported the theft to their local Police force and awaited updates. A few newspapers briefly reported that the crime had taken place.

The Jathedars of the 5 Takhts issued a pardon to Chief Gurmeet Ram Rahim of Dera Sirsa who had in previous years insulted the Sikh Gurus and mimiced Sikh traditions. A cinematic movie about the controversial Ram Rahim was released the following day after weeks of consideration by Censors.

Read the press note issued by the Jathedars 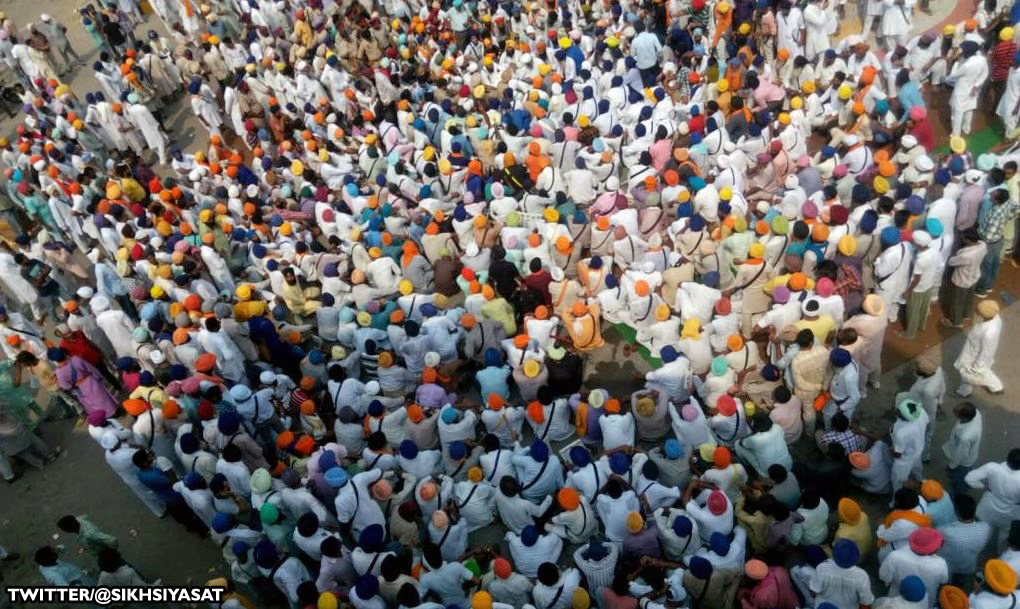 A letter (poster) surfaced claiming to have been written by followers of the Dera Sirsa sect, taking responsibility for having stolen the bir and challenging Sikhs to come forward and recover it. The letter stated that the bir could be found in the neighbouring village of Bargari.

Torn angs (leaves) from the Guru Granth Sahib were found in alleyways in the village of Bargari. A few Sikh activist groups arrived to accompany local Sikhs to find out why investigations had been so slow. The Police force had been typically slow to move forward and continued to dawdle despite the sheer gravity of the situation.

It became clear that the crime was not being taken seriously; more and more Sikhs began to reach the nearby town of Kotkapura where the local Police are stationed. There they sat in peaceful protest admonishing the Police for not having adequately undertaken investigations and demanding that action against the perpetrators be taken.

Sikh personalities and leaders amongst the protestors were arrested which attracted more Sikhs to reach Kotkapura and join the peaceful protest. But in response, Punjab’s Police force enacted heavy-handed tactics to prevent more Sikhs from reaching the protests, going as far as to lathi-charge (baton-charge) travelling groups in the neighbouring village of Bhuttar.

Events escalated when Police used water cannons and tear gas in an attempt to dispel protestors who had merely congregated and sat in Kotkapura Chowk. Buses were commandeered to take protestors to jail, but were misused by the Police, instead moving protestors to other parts of the region where they were simply ‘dropped’ and ‘left to return home’.